Best of the Century! 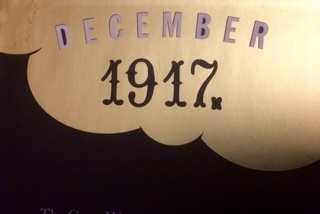 The events in Conversations with Spirits take place in the second week of December 1917 – so, I guess, this is the centenary!

Yes, it’s exactly 100 years since Trelawney Hart and Arthur Conan Doyle made their fictional trip to the Kent coast to bear witness to the ‘physical mediumship’ of that mystical chap, that bore a striking resemblance to my older brother…

Oddly enough, when I wrote the story – oh so many moons ago now – and envisaged the protagonist: an irascible, drunken, chain-smoking, tweed-sporting arsehole, tottering about Thanet’s public houses with a misplaced sense of entitlement – I had, weirdly, never heard of Nigel Farage. Yes, those were happy days indeed!

So, what was happening 100 years ago?

Those history buffs amongst you will probably be scratching your corduroy-clad arses and saying to yourselves: “Hang on, there was something going on in 1917, wasn’t there? A war – or some such thing? Don’t remember much mention of that in the book?”

And, of course, you’re right. On both counts.

1917 was, of course, the penultimate year of The Great War! (Though ‘The Great War’ seems like it might be something of a misnomer – because, by all accounts, it was a bit shit.) And you’re also quite correct, the war doesn’t really feature that much in Conversations with Spirits. It is, in fact, rather an incidental character in the book. It’s there, it gets referenced, but it's always far off – hovering about the scene’s edge…

There is a reason for this. When I started writing the book, I had not intended it to be set during the war at all – and indeed, placing it there meant that I was forced to juggle a few historical details. But, the more I thought about it, the more it seemed like a thing that needed to be done.

At the start of the novel, Trelawney Hart is entirely self-absorbed. The fact that there is a war going on, is of little interest. His point of view – skewed by personal tragedy and successive brandies – is entirely inwardly focussed.

His futile, sedentary existence is as far removed as can be from the average soldier’s experience – he is leading a withdrawn existence, hidden away from the wider proclivities of life, inside a safe, luxuriant environment. His privilege being such that, in drinking to excess, he is slowly killing himself…

Naturally, when he encounters Sir Arthur – an older man that desperately wants a greater part in war, but has been denied it – there is a tension. And it’s a tension was very much required. After all, what’s the point of having an absolute stinker of a character, if he doesn’t get endlessly needled by much better people?

Anyway, the action in the book – such as it is – begins with Trelawney’s journey from London to Broadstairs on Friday the 14th December 1917, and ends – with the mystery finally unravelled – the following Sunday.

The news-journals that weekend were primarily concerned with the British forces’ ‘Jerusalem Operations.’ Having taken place largely in the Judean Hills, the fighting had culminated at the end of the first week of December with British forces capturing Jerusalem.

It was such a big news story, that I thought it made sense to reference it in the book:

Here it is in the middle of Chapter II:

It struck me that there is something otherworldly about these great municipal railway stations – it’s the noise and smoke and waves of dispossessed people. I could readily imagine myself lost in some classical depiction of Hell.

Having procured a number of newspapers from the bookstall, I walked down the platform and boarded the train in a cloud of filthy air. Due to the mix-up with the tickets, I was still lugging about the carpet-bag that Sibella had packed for me. I planted the bag and the bowler hat into the wooden rack above my head and settled into a seat within the empty compartment.

Presently, the compartment began to fill up. A small, sallow-looking man climbed into it, furiously rubbing his hands together. The left leg of his trousers had lost its stitching and hung down behind his heel. As he planted himself into the chair next to me, I was hit by the curiously potent scent of old bread crusts. He was closely followed by a slipshod woman, of robust character, who dropped breathlessly into the seat on my other side. Unclasping the handbag resting on her knees, she delved inside and surreptitiously extracted a large pink saveloy, which she devoured hungrily.

Just as the whistle blew, and the train departed the station, a beery looking bloke (from the candle wax staining his frayed shirt cuffs, evidently some manner of tallow chandler) clambered into the carriage from the platform’s edge and settled into the vacant seat opposite me – whereupon, he instantly took up a knife that had been concealed within his left boot. Not unnaturally, I started at this, and, observing my surprise, the man looked across at me with some relish. Then, apparently by way of explanation, he took a pippin from the pocket of his dishevelled greatcoat and sliced into it. “Don’t worry,” the man breathed in a low, rasping voice as he pulled away a chunk of the apple with his thumb. “You ain’t my man. You needn’t worry.”

“I see our boys ’ave gotton Jerusalem back,” said an old man from behind a quivering newspaper, further down the line. “It’s about time we gave ’em what-for – filfy Arabs.”

“I know,” replied a marmalade-haired woman sat two seats to my right. “It ain’t right, is it, the Germans ’aving that? After all, it were buildeth ’ere, weren’t it?”

Obviously, I couldn’t allow the anniversary to go unremarked...

Well, actually, I could’ve done – and, let’s face it, you probably wouldn’t have been massively inconvenienced if I had.

But, I suppose, it’s also a fairly good opportunity to offer you, gentle reader, some seasonal greetings!

I wish you all figgy pudding – and lashings of good cheer!

Happy Christmas, one and all!