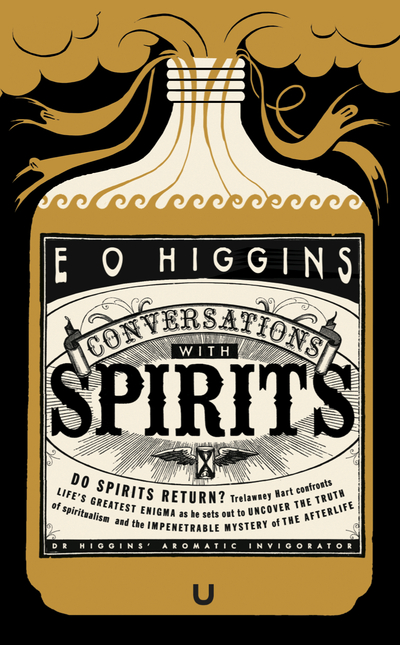 Fiction | History
Rewards for this book are not available.

Be in the book

PLEASE NOTE: Conversations With Spirits is in production so your name can not be listed in the back of the book. However, you are guaranteed a copy of the special Unbound edition that will not be available in the shops.

Trelawney Hart has given up on life.

Indeed, if it wasn’t for the cherry brandy in store at his London club, some days he wouldn’t get up off the floor at all.

The product of a bizarre childhood conditioning, Hart was raised on a diet of logic and mathematics - which, though endowing him with greatly overdeveloped mental faculties, left him emotionally starved and antisocial.

Twenty years on, Hart has withdrawn entirely from society and now ekes out a feckless, lonely existence, rarely venturing outside the reading-room of The Hyperborea Club.

This lifestyle is summarily interrupted, however, when Sir Arthur Conan Doyle - spiritualist crusader and celebrated author of the Sherlock Holmes novels - arrives at the club’s door and demands that Hart travels to Broadstairs, Kent, to help him investigate a local man by the name of J.P. Beasant, whom he believes to be a psychic medium of unparalleled gift.

Hart agrees to attend an upcoming demonstration of Beasant’s powers, driven on by his anticipation of exposing the psychic as a fraud. However, it is not long before he finds himself lost amidst a series of seemingly inexplicable events - and he is forced to consider that there may be much more to life than he had ever thought possible…

Conversations with Spirits is a comic mystery novel, set over the course of a single lost weekend in 1917. A sharp, beautifully-realised ramble through English society during the last years of the Great War, in the company of a host of vividly-drawn characters - and none so richly rendered as Trelawney Hart: a dissipated genius in a borrowed hat and coat.

What is Jottify?
Jottify.com is an online community where authors can share, discuss and sell their work. We discovered E O Higgins through Jottify, after Conversations with Spirits became a roaring success on the site.