We Might As Well Have Installed a Revolving Door...

Many of you will be familiar with the story of Orpheus in the Underworld, a tale that has a lot of significance to Comeback.

However, in case the details have slipped your mind, here's a quick precis.

Orpheus was an Ancient Greek musician who, long before his descent into the underworld, had been making a name for himself as some kind of mythological superhero. His famous lyre was bequeathed to him by none other than the god Apollo (who also taught him to play) and when Jason was assembling his team of Argonauts, Orpheus was right up there in the front row with Hercules.

Unlike some of his contemporaries Orpheus survived the voyage of Argo, returning home to marry his sweetheart Eurydice.

This is where it all started to go wrong. For a start Eurydice didn't even make it past her wedding day due to an incident with a shepherd and a nest of vipers. However, Orpheus wasn't going to take the death of his betrothed lying down. Instead he decided to travel into the underworld to rescue the fair Eurydice from death itself.

How difficult could it be? 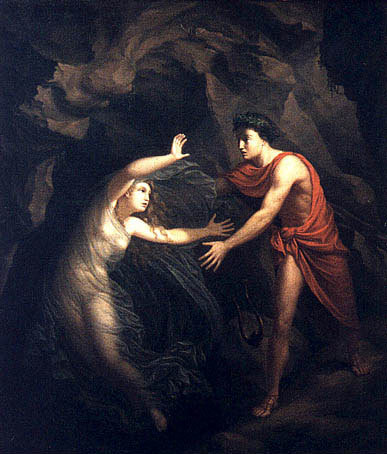 After a series of trials Orpheus eventually reached the court of the rulers of the underworld, Hades and Persephone. After hearing a Surreal Command Performance of his greatest hits, the dark deities agreed that he'd be allowed to return up top, taking Eurydice with him.

It was a very strange - and some might argue irrelevant - condition. Eurydice would be allowed to accompany Orpheus back to the real world and resurrection provided she walked behind him and - this was the clincher - he didn't look back to check she was actually there. Pointless, but fairly easy to obey as long as you could keep your natural urges under control.

Unfortunately Orpheus couldn't. At the last minute, just as he was emerging he looked over his shoulder to check. After all, she'd been uncharacteristically quiet on the journey back...

As good as their word, the Gods of the underworld dragged Eurydice back into the afterlife leaving Orpheus just standing there on the hillside, having wasted his one and only chance of success. It's true that even if he hadn't looked back there might have been some other nasty surprises in store for him - for all he knew Eurydice could have been returned to him as a zombie, he wouldn't have put it past the Gods - but even so it was a kick in the teeth for which he had only himself to blame.

So is the moral of the story essentially to keep going and don't look back?

Possibly. However it could be said that the moral is to obey all the rules, no matter how petty they might seem because those in power enjoy enforcing them to the letter, whatever what the spirit of the agreement might feel like.

You could call them Godsworths.

Having studied classics at university, Genie has at least been forewarned of these particular pitfalls of her chosen mission. However that's not to say that she won't come up against a whole new set of obstacles...