Two Little Ducks or The Conspiracy Theorist In Your Head

This isn't the first update I've written about numbers and won't be the last. For a start I've always had a fascination with them and the logical knots in which they can tie you. Just look up the Interesting Number Paradox for instance; just one of many which show that mathematics can be far more mysterious and illogical that you would imagine. 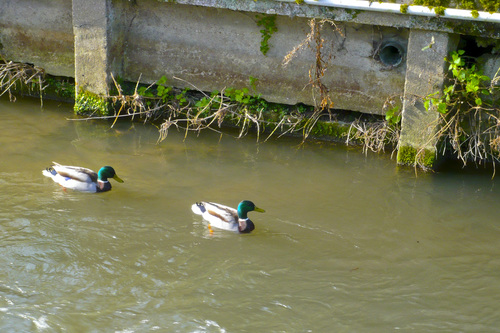 I've previously written about Ordinal Linguistic Personification and the way it affects how I relate to numbers and the effect they can have on me. I've also noticed that the patterns they form can have an effect on my mood and hopes; how symmetry can make it feel that things are going well and that there is a cosmic plan

Asymmetry on the other hand just feels like chaos.

Of course this is due to the brain's desire above all else to see patterns. It will see patterns in everything and anything. If you come across three random things the brain immediately starts working on a connection. It's the ultimate conspiracy theorist. Three is where patterns begin — it's not for nothing we say "third time lucky". Once is random. Twice is just two randoms. But three — well that's where a pattern could emerge and so that's where our brain starts pinning its hopes.

And numbers coinciding feel like more than that too. Next week I'll have been working in my current contract for a year and my novel Comeback will have been crowdfunding here for eighteen months. Coincidence? Yes. But lets see how I can use those numbers to increase my energy and push this thing through the final stretch.

The number I am concerned about now is twenty-two. Two little ducks in bingo parlance although that always used to bother me. The bingo call should not include the number it's hinting at. That would be like "Two and three, twenty-three!" But I digress.

Twenty-two is the number of percents I need to get in order for Comeback to complete funding. It's not that much really - the first twenty two took a couple of months, but perhaps these things accelerate in the final stages as it becomes clear that the goal is about to be attained.

I have taken a little time off these updates as I felt my Advent experiment - where I posted one every day - might have wearied your inboxes. But now I am back! We're nearly there so huge thanks to every single one of you who has pledged so far and spread the word - it really does feel that the end is in sight now. And thank for continuing to read these updates. Do please tell all your relatives, friends, colleagues, comrades and acquaintances - every pledge counts!