For the past ninety days I have been writing my third novel in the sequence that starts with Comeback. I built up some momentum and got into a habit of doing it almost every day (occasionally I was too busy or exhausted). Habits work for me once they're established; to help bolster this one and shame myself into not giving up, I tweeted my word count every day even on the few days when it was zero. By the end of the sequence I reached 46,536 words, which I hope makes up more than a third of the story. As a confirmed pantser this was quite an interesting process as I discovered many things about the plot and the character about which I'd previously had no idea.

So why did I stop now?

Well in one of those bizarre coincidences, day ninety of this process came exactly before the day (today) that marked two months until Comeback's publication on 21 January 2021. During those two months the time I previously allocated to writing Novel Three will be better dedicated to preparing for the release of and marketing Novel One. 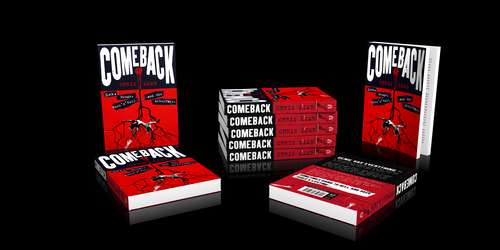 We are in a very different environment now than the one I envisaged when imagining Comeback's launch. I had been planning to hire the Pelirocco hotel bar for a small launch event. Why the Pelirocco? Well it appears in the novel and they were helpful getting back to me when I contacted them for some research. That's all been scuppered of course by the pandemic. I had hoped that when the launch date was postponed because of said pandemic it would be all over bar the vaccinations by then.

But no. That would have been too easy. Instead it looks like we will be deep in the second wave.

So I am going to have to look into how a virtual launch event would work. Furthermore I am going to have to arrange a blog tour, which is something, I know nothing about yet but which I am going to start learning about and arranging this week. I will also need to begin contacting local bookshops to let them know that a local author has a book coming out part of which is set locally. Again, doing some kind of talk in bookshops would have been nice but that's impossible now.

And I am going to keep up the momentum by doing something towards the marketing every day – writing something about what I've done. Not always as an Unbound update as I don't want to flood your inboxes or bore you – but as a Twitter thread, Voice entry or something else. Just to force myself into making as good a job of this as I did of beginning the third novel.

Maybe this will surprise me as well.

Right, better roll my sleeves up and get on with it.