It's tricky trying to pinpoint when one's memory begins.

Sometimes an early memory can include within it the fact that you remembered something from earlier in time, even though the earlier memory no longer seems to exist. 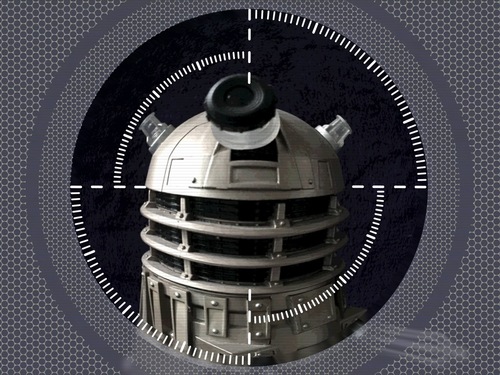 For example, when I was a young child I was—perhaps in common with a lot of young children—obsessed with Daleks. And yet, even though I was too young to have remembered watching them on their final appearance in Doctor Who during the 1960s, when they were due to reappear on screen after a gap of five years I was excited at the concept of seeing them again. Which means that at the time I must have recalled the earlier appearance. Do early memories decay more easily? Perhaps they require the framework of a more developed mind to "stick"...

However once I'd watched them again with a developed mind my obsession took hold. I spent ages drawing Daleks, familiarising myself with their structure, how many hemispheres per panel, how many slats and so on and so forth.

One thing I really wanted was a full sized Dalek of my own.

The Radio Times special that came out to celebrate ten years of Doctor Who contained the plans for building a Dalek for the sum of £15. I badgered my parents to let us do it but they said it was too expensive (which was fair enough—it's the equivalent of £125 today). So I had to make do with fantasising that I would go up into the attic and discover—quite by chance—that we had all the raw materials up there to make it for nothing.

It didn't happen of course. But a couple of years later I had another chance. Walls Ice Cream brought out a mint and chocolate lolly called the Dalek's Death Ray. And on the back was a competition to win a full sized Dalek!

There was a snag though. The competition read:

The year is 1995. The DALEKS have invaded Planet Earth ... They have occupied your town ... your school ... your home! Imagine one of these scenes - and draw it for us.

So far so good. I was adept at drawing Daleks. But then came the fly in the ointment.

The most imaginative picture EVERY MONTH wins a REAL LIFE-SIZE DALEK FOR YOUR SCHOOL. Be the hero of your class.

For my school? For my school?! FOR MY SCHOOL?! Damn my school, I wanted the Dalek for myself. I cared not for being the hero of my class. Again I started fantasising, perhaps when I won I could tell them I was home schooled so would get to keep the Dalek...

Luckily I didn't win so never had to face that eventuality.

However, I did meet a Dalek up close and personal—quite separately from my trip to the Doctor Who exhibition chronicled elsewhere in these updates. A fete was held every summer in the field next to the very same school that would have filched my Dalek had I won it. One year I joined a handful of people who went to pick a Dalek up from somewhere off Muswell Hill Broadway. Again, my memory fails me here and I don't recall from where we collected it. What I do remember is feeling very proud and excited as we pushed it along the Broadway, down Grand Avenue, past the school and down into the fete. As we made our way there the Dalek picked up a following of children like some kind of metallic Pied Piper.

That was my last significant Dalek encounter. I am sure there were Daleks at the Longleat Doctor Who event in 1983, but they didn't stand out as much.

Now that I am an adult of course I could indeed have a full sized Dalek if I wanted one. A company called This Planet Earth sell them for £3,500 (that's the equivalent of £280 in 1973). But where would I put it? I had a hard enough time finding the space for my fridge.

I will have to settle for more immaterial desires. Like having Comeback reach its funding target for example...