Usually an epiphany is something that appears in a flash but I had a thought yesterday that made me realise part of me has been changing gradually over the past few years. A tweet from James Oswald (@SirBenfro) about avoiding the use of the word "hate" on twitter and in other online arenas made me think back over my own history online. 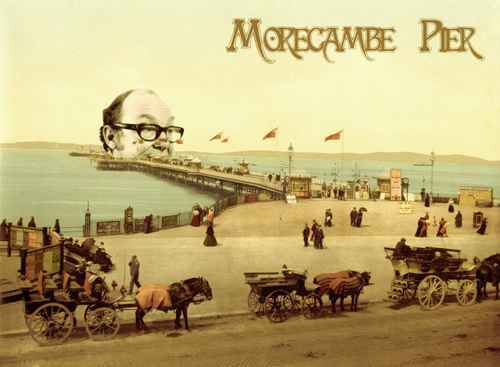 There was a time when I often started tweets with the phrase "I hate it when..." and even used a hashtag for a while #todayshates. While some of my earlier blog entries ranting about irrational irritations can be quite funny (even though I say it myself), I thought it was odd that I didn't really write them nearly as much any more. I looked back through my twitter history and discovered that almost all of my use of the word "hate" in tweets since late 2015 was in the middle of the word "whatever", whereas before that there were almost always spaces around it.

I do still have my bugbears of course but nowadays I find things like misplaced apostrophes or the inappropriate use of comic sans font amusing rather than fury inducing. I am not sure what induced this chilling out — I did have a significant mental gear change during 2016 — but I can only conclude it must have done me some good.

After all there's plenty of real stuff to worry about in the world these days. Far more deserving targets for resistance and genuine concern than the misuse of punctuation.

In addition, and more consciously, I've also made more of an effort in the last few years to avoid using the word "no" when declining or disagreeing with someone. It's a very small change and whether it makes any difference to the other person I have no idea but I think it helps me to express what I want or what I think in positive terms rather than focussing on what I'm against or what I dislike.

Of course some people might think that what I'm espousing sounds like some kind of half baked spiritual hippy dippy nonsense about positive thinking.

Perhaps it is but consider this.

The world around us isn't objective reality. Each of us carry around a little model of the universe in our own heads made up of sensory input filtered through a pattern recognition processor based on memories and experiences. If there is even such a thing as objective reality, it is a cloud of whirling probabilities and particles; a fog of physics and philosophy that bears as much resemblance to what we think the world is as a cake's ingredients do to the finished article.

We each have our own unique version of the world in our head. No two are alike although there is usually an overlap, enough consensus for us to live together. The point is that we live in a mental model of the universe inside our brains, the same brains in which our thoughts, positive or negative, are taking place. It's not so much of a stretch to suggest that one set of things could affect the other. I'm not suggesting that good things come to those who think good thoughts, that karma is real, but perhaps a clearer outlook is indeed possible if we try to make our minds as free as possible of pointless negativity.

It's a nice thought.

As ever I'll finish with a postscript consisting of a little bit of admin. Comeback's crowd funding campaign is nearly at 80% completion so really doesn't have far to go now. Huge thanks to every single one of you who has pledged so far and spread the word - it really does feel that the end is in sight. Do please continue telling all your friends, colleagues and acquaintances - every pledge counts!