I've always had trouble coming up with the titles for stories, especially novels. I never thought of a satisfactory title for the first novel I wrote in around 1990 (near future science fiction, the dates of some of the events in which we've now passed) and for a long time Comeback was known only by the working title of Genie in Underland.

This is an obvious reference to Alice in Wonderland, a book that at first glance does have some similarities to Comeback and was very probably an influence (subconscious or otherwise) - as a child the Alice books were amongst my favourites. 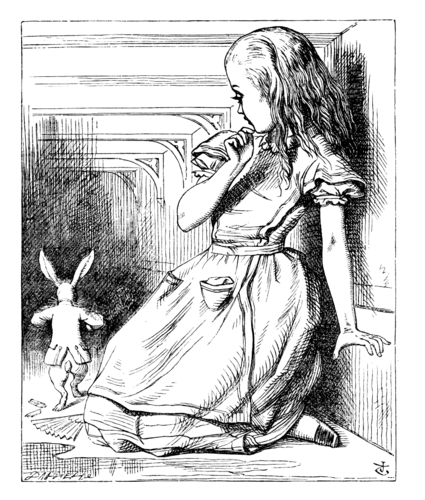 Both have a female protagonist who enters a mysterious subterranean realm in pursuit of their goal. Both journeys start with a memorable descent - Alice's rabbit hole and Genie's escalator - into a world where the normal rules of logic have been waived.

And I'd say the central characters do have some traits in common. Not that Alice is the equivalent of a coked up pop star - but both are considerate people who react with calm surprise rather than panic when faced with the alarming and ridiculous (though Genie does have the odd wobble when things get too much for her). Neither of them suffers fools gladly and they are both quick to point out the flaws in the arguments of the beings they encounter - and they're not afraid to be rude.

I put only one actual Alice reference into the text of Comeback and unexpectedly it occurs in the real world during a flashback rather than in the Underworld.

There is one major difference between Alice in Wonderland and Comeback. The former turns out to have all been a dream, whereas it's not a spoiler to say that Genie's experiences are all very real and have consequences.

Alice in Wonderland is perhaps the ur-text of "it was all a dream" and as such I have no problem with it; however in general I am not best pleased when it happens in a story I have hitherto been enjoying. I was devastated at the end of Jennie by Paul Gallico when it is implied that not only were Peter's experiences when transformed into a cat for the bulk of the book very probably a dream, but a dream he does not even remember by the end of the last chapter.

However I'd say that the Alice books can be forgiven for inventing this sin because their narratives use dream logic so extraordinarily well. Long before the awakening at the end of the book it's clear we're in a dream state - absurd things are happening without question, people and places change identity without so much as a by your leave and irrational arguments make perfect sense. The baby becoming a pig; the encounter with the White Queen who becomes a shop-keeping sheep, the shop itself then becoming a rowing boat; the crowd of invisible voices that all speak (and think) in chorus when Alice is on a train... I could go on.

The most impressive part is the way that Alice's thought processes themselves are often surreal and ludicrous and yet make a kind of sense in context.

However, the Alice books aside, I feel generally feel cheated when either everything turns out to have been a dream or when everything returns to normal and everyone goes home after a series of outlandish adventures. It's as if the author is saying that these things couldn't really happen - or that if they did, then they really shouldn't have.

One of the things I really enjoyed about the end of Neil Gaiman's Neverwhere was the way it subverts the second of these tropes. SPOILER ALERT: at the end, Richard Mayhew has returned to his everyday life and gets both his flat and his job back. But then he realises that leaving London Below was possibly the biggest mistake he's ever made - so he finds a way back. Now that's an ending I can get behind.

I hope you all find the ending of Comeback equally satisfying.