Not Parallel, Not Universes

I have been reading about The Mandela Effect. This is a name for collective false memory whereby a significant amount of people will swear blind that something in the past was one way whereas in actual fact it was another and furthermore there's written, photographic and filmed proof.

The most likely explanation for this is that misconceptions which lead to a false memory of something are common misconceptions and that people susceptible will develop similar false memories, which they can then reminisce with each other about thereby strengthening them. 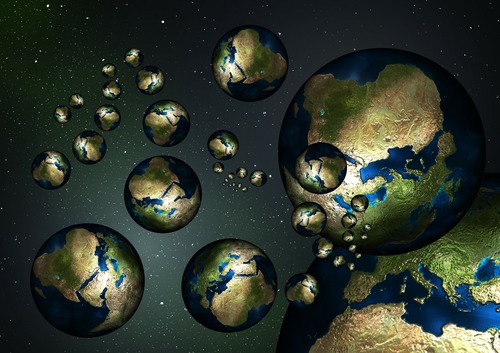 A more outlandish theory—and much more interesting from a fantasy point of view—is that the people remembering things differently are now living in a different parallel universe from the one in which the memory was first formed. Sounds rather far fetched, especially in the online articles about this phenomenon that shriek, "We are living in an alternate universe!" For a start that's not what the theory says. It says that those experiencing it are now in a different universe, not all of us.

Other online pieces attempt to "debunk" Mandela Effect examples by presenting proof. Well, duh. If this really is an alternate universe then of course there will be proof you can compile into a listicle. That's like more extreme version a citizen of Airstrip One in George Orwell's 1984 using the official back issues of The Times to prove something happened a certain way—only in this case it's not The Party but the entire multiverse that is conspiring to change the facts to fit the narrative.

I am not suggesting that all this is true and that people are retaining memories of the parallel universes where they lived earlier in their lives, but it is a fascinating idea worthy of exploration from a science fictional or fantasy point of view.

For a start it's highly unlikely that people who swear blind that Bruce Springsteen used to be called Bruce Springstein are actually physically jumping from universe to universe. However given that the Many Worlds Interpretation of Quantum Mechanics implies a blurring of reality down on the quantum level then it's possible that the human mind—constructed as it is from nerve impulses the mechanisms of which rely on microscopic events—is in some way in contact with the versions of itself in nearby neighbouring realities. Perhaps information leaks through. Perhaps the locus of self leaks through. But even so the body of such a person is the body that has always lived in this world.

So will a Bruce Springsteen fan who had a tattoo of his name on their arm find that the tattoo has changed? That's the thing—someone that invested in Bruce Springsteen will always have known the correct spelling and therefore won't have developed the false memory in the first place.

Reading through the list of Mandela Effect examples I realise that I haven't experienced any of them. The effect is named after the conviction that some people have that they clear remember Nelson Mandela dying in prison in the 1980s. Whereas I have a clear memories from the 1980s of the Mandela Hall at Sussex University, which was named after him in solidarity with his struggle, and The Special AKA having a top 10 hit with "Free Nelson Mandela".

I do have a couple personal examples though. For example I have quite a good memory for TV dialogue even if only seen once. I was convinced that in the famous "Kitten Kong" episode of The Goodies at one point Bill Oddie says, "Well, it's eaten up the Post Office Tower!" However on watching the eventual commercial release of the show on VHS I discovered that the line is subtly different: "It's already eaten the Post Office Tower!"

Of course if memory is stored in the physical structure of the brain then even leaping from reality to reality wouldn't do any good as each time you'd arrive in a brain with only the memories of that reality... For all we know we're already doing it all the time.

However, I am convinced that there never was a cartoon called The Berenstain Bears, however it was spelled.

Pledges are still coming in, so a big thank you to my new supporters! The rate has slowed down a bit though so if I could ask each pledger to please consider talking just one friend into doing so as well that would be fantastic thank you. Every new pledge makes a huge difference. If you haven't pledged yet, do please think about it. The minimum level is just ten pounds...