Previously: Daryl attempts to summon the devil and appears to succeed. And now the conclusion: 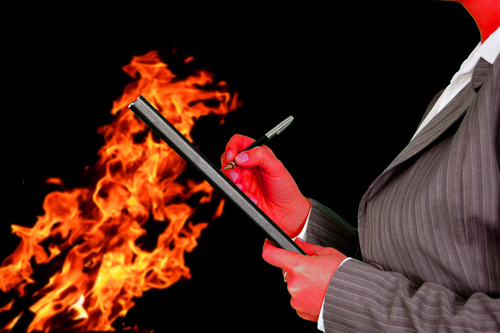 Daryl opened his mouth but nothing emerged.

The figure closed her eyes. “I'm a demon. A devil if you like. No definite article required; there are millions of us. My name is Jezebeth. And don't just lie there, I haven't got all day…”

She held out her immaculately manicured red hand. Without thinking Daryl reached towards her, they clasped hands and she pulled him upright. Her flesh was hot, dry and somehow slippery. Daryl stepped back as she released him. There was a peculiar smell—a bizarre combination of flowers and burnt sewage.

This had become too real too quickly. Daryl was tall and heavy—the phrase brick shithouse was often bandied about—and wasn't used to feeling small. Jezebeth's presence clarified just how insignificant he was and not just physically.

“Let's get on with it.” She pulled a tablet from a pocket and began swiping at it with a stylus. “I've got real work to finish you know. I was in the middle of something.”

“I…” Daryl managed. Jezebeth glared down at him.

“I've got a department to run. There's an important meeting later. This kind of thing is just…” She waved a hand about with irritation. “It's like manning the helpline or jury duty. If I get it out of the way I won't have to worry about it again for a couple of centuries. What do you want?”

“Engage brain before summoning demon!” Jezebeth rolled her eyes. “Soul trader, right? You want to offer me your soul in exchange for something in my power to grant?”

“Good. Now we're getting somewhere. Under new legislation I have to let you know what the sale of your soul entails. Most humans have a very warped idea of the eternal verities.

“Firstly there is only one afterlife—no heaven or hell. All souls end up in the same place. Therefore the sale of yours has nothing to do with where you end up. It's more an employment contract. Once you've passed on you'll be mine for eternity. On my team. To be frank it's mostly paperwork of one kind or another.”

She held the tablet out to Daryl. “Press your thumbprint in the box to agree.”

Daryl obliged and Jezebeth returned the tablet to her pocket. She clasped her hands together and smiled.

“Now what is it that you want?”

“I… I want to…” Daryl's mouth was dry and the air in the bedsit had become arid. Plus it was embarrassing.

“Come on!” Jezebeth widened her eyes.

“I want to live forever.”

Jezebeth blinked and said nothing for several seconds, staring over Daryl's head into the distance. She smiled, narrowed her eyes and looked down at him.

“You can't?” To be frank it was what Daryl had been expecting.

“I didn't say that.” Jezebeth lowered herself to sit on the floor. “It's very easy. I don't really have to do anything.” She gestured to the chair behind Daryl and he pulled it forward and sat.

“So you will?” Daryl looked across the makeshift altar at the inhuman face opposite him. Deep red eyes the size of billiard balls transfixed him with their gaze.

“Of course. Have you heard of the Many Worlds Interpretation of Quantum Mechanics?”

Daryl had always been more into fantasy than science fiction. Wasn't that something from an episode of Star Trek? He nodded anyway.

“Good. And you've heard of Schrödinger’s Cat? Imagine you're the cat.”

Daryl's heart started to beat faster. Was she…

“No I'm not going to turn you into a cat.” Jezebeth leaned forward. “Given that the cat is both dead and alive inside the box until observed then from the cat's point of view it has to end up in the world where it's still alive. Its consciousness no longer exists in the other one. You see?”

Daryl frowned. “I think so.”

“It's logic. Faced with death, if there's a chance of survival then that's what you'll experience. You can't experience worlds where you don't survive. From your point of view you live for ever.”

“But…” Daryl wondered where the afterlife came into this.

Jezebeth held up a finger. “Yes. Continued consciousness in the hereafter renders this argument invalid. But some people don't believe in life after death. They don't believe in it a LOT. Atheists' faith in their doom is unshakable—stronger than any religion. Their point of view won't allow them to countenance the afterlife. They get this instead.”

“Each atheist is the first person to live forever. From their point of view. It's not much of a stretch to extend this mechanism to you. Happy?” Jezebeth pulled the tablet from her pocket again and presented it to Daryl. There was a new box, outlined in red, awaiting his thumbprint.

It was a no-brainer. He pressed his thumb to the tablet's surface.

“There's no time like the present is there?” Jezebeth reached across the altar and placed a hand on Daryl's knee. A flood of warmth and wellbeing flowed into his body. “Welcome to eternity.”

There was a pain in Daryl's chest. He couldn't breathe. Jezebeth removed her hand from his knee and stood up.

“You're having a heart attack.” She removed an object from her pocket and placed it on the altar. “Don't worry it won't kill you. I keep my promises.”

Daryl fell off the chair. From this angle the object on the altar looked like a crystal ball. Beyond it Jezebeth smiled down at him, a hint of malice entering her expression. “Eternity is part of time,” she said, “And time is subjective.”

Daryl could no longer see. The pain in his chest was overwhelming. Despite Jezebeth's promise, this was killing him. The pain was unbearable. He doubted he'd last two more seconds.

It was the next second that would kill him.

Against the odds he lasted a second more.

But surely the next half-second meant his end?

No, he made it through.

Just a quarter of a second to go.

And an eighth on top of that.

Daryl's lifeless body lay on the floor of his bedsit.

Jezebeth picked up the crystal sphere. Inside it red swirls flickered and flashed. If she put it to her ear she could almost hear the agony of Daryl's final moments stretching out forever as his consciousness leapt with mounting desperation into the ever-decreasing amounts of time it had remaining.

There was always an infinitesimal chance of survival and it would always take it.

“Should have asked for a lottery win.” Jezebeth remarked. She twirled the sphere between her fingers before dropping it back into her jacket pocket.

She'd needed a new paperweight for her office.