It may perhaps come as a surprise to you that it is now exactly a year since Comeback reached full funding.

No it doesn't seem like that long ago to me either, but on the other hand it was in the Before Times, before the pandemic, which now seems like an aeon ago. Without the last six months having being swallowed up by the covid temporal black hole we might now be on the very cusp of the book actually coming out – but as it is we've got a little bit of extra time, so let's make the most of it. 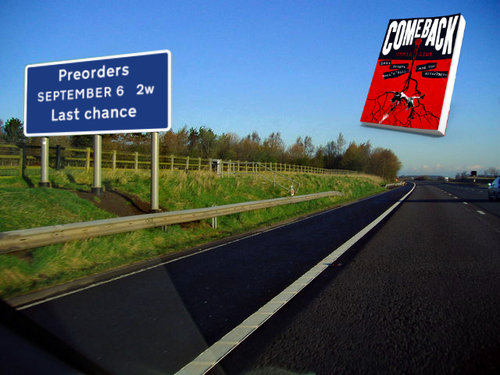 Of course everyone subscribed to these updates is already a backer, someone whom pre-ordered the novel with an pledge at some point since August 2017 and who as a result will get their name in the back (or the front!) of the book as a thank you.

Let me once more add my sincere thanks to all these people. I will forever be grateful to you for the faith you showed in me by pre-ordering in this way and ensuring that Comeback became a reality.

However due to the fact that as usual I'll be plugging this update outside the subscriber list, it is possible that some reading this post won't yet have pre-ordered the novel.

The pre-orders are still open, but will be closing at midnight on Sunday 6 September. This means that you have just two weeks to pre-order and get your name on the list of backers in the book itself – which is a way of having my gratitude to you immortalised in print in five months time when the book is launched. Pre-ordering will take you only a minute now, but your name will stay on that list in the book for eternity.  (Plus of course you get the book itself as well!)

Five months may seem like a long time but looking back at the last five months which have been spent on my own in my flat barely venturing out and never without a mask and gloves, I am sure the next five months will pass like a flash. Before we know it the book will be out there. Hopefully we will be as well.

Now I had better get on with writing the third book in the sequence (the second one is already done and dusted).