I Think I'm in Hove

I realised the other day that it's now twenty years since I moved down to live by the sea in Brighton and Hove (even though I had spent a little time here as a student before that). The bulk of that time has been spent in Hove.

However, the first place I lived - a purpose built 1930s Art Deco block of studio flats that always reminded me of the places Laurel and Hardy lived in their short films - was in Brighton. The front door of Astra House opened onto the sea front, almost directly opposite the West Pier. There was a lift and a foyer with a reception desk (never staffed). It almost felt like a hotel. This is one place that has stayed with me - despite moving out in 2002 I still dream about it to this day. The dreams consist of me returning there to retrieve something left behind (often a box of books) only to discover many hidden floors and spaces in the building that I hadn't previously been aware of - including on one memorable occasion a cable car running up the outside of the east face. 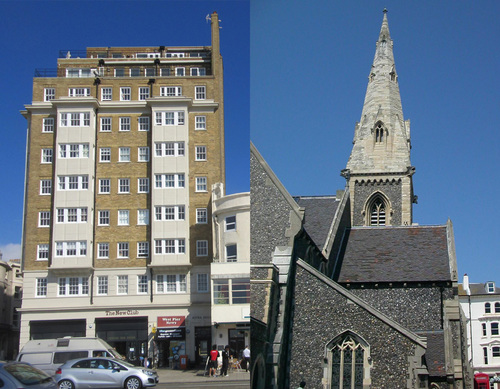 In 2002 I moved one kilometre west, to a two bedroom flat upstairs in a converted stable halfway up a mews that led off the seafront. Stepping out of my front door in St John's Road I only had to turn my head to the left to see the sea waiting at the end of the road, either twinkling or churning angrily, depending upon the time of year. Looking the other way the spire of the local church always dominated the view. I was there for twelve and a half years, and sometimes it seemed as if I would be there forever. Oddly I never really dream about it. I shared with a number of people there before spending the last few years on my own.

Early in 2015 I was told that the landlord was converting the two flats back into a house so I had to leave. I spent quite a while looking for somewhere suitable - nowhere seemed to have enough room for my twelve years of accumulated crap. And then I looked at a one bedroom flat in Tisbury Road, Hove that met my requirements. Once again, all I have to do to see the sea is come out of my front door and look left. The sea's one block further away now but I can still see it, now adorned with rows of wind turbines the red lights on top of which blink at me in Morse code at night. I've been working freelance at home a lot of the time I've been living here so the environment has impressed itself upon my subconscious perhaps quicker than the other places did. I have had dreams set here.

The interesting thing about all three of these places is that they're all ones I'd walked past or briefly encountered in an earlier existence down here as a student (at least half of which was spent living in Hove). And yet they felt totally different. Before the everyday familiarity they accreted due to my living in them they possessed an odd sort of excitement, an exotic unfamiliarity. On one rare occasion I walked all the way from my student digs in Portland Road in deepest darkest Hove to central Brighton. I passed all of these places. Tisbury Road was a wide alien tree lined avenue with the brutalist concrete town hall at one end of it. St John's Road was a quirky semi-industrial secret hidden away from the main drag of Church and Western Roads. I clearly recall Palmeira Square seeming like a busy halfway house between Brighton and Hove, full of second hand bookstores and charity shops. And I must have assumed Astra House was a hotel, sitting in such a prime location on the city centre seafront.

It still surprises me how different these early memories are from my contemporary mental models of these locations. They may occupy the same spaces as they did back then but the fourth dimension of time has changed their landscape and atmosphere irretrievably.

Parts of Comeback are set in Brighton. Some of them very near Astra House. Hove also makes an appearance, but just how these places work their way into the story you're going to have to wait and find out. We don't seem to have far to go now - only a hair's breadth away from 70%. Seven is the first grown up number and therefore 70% the first percentage that feels like "doing well". You can all help the book reach that target soon – so please tell your friends, relatives, colleagues and acquaintances - every pledge counts towards the ultimate goal.

When I'd been living in Hove for a mere six years - now up to 26! - my email signature was "I live in urban Hove / I enjoy rock 'n' roll." Probably not what the Manics had in mind.