I have been thinking recently about the kind of characters who engage my attention in fiction, who interest me. Not those who I like per se—not necessarily the kind of people I'd want to spend any time with—but the ones whose fate I care about.

The odd thing about this is that most of the time they are neither good characters nor bad characters. They're interesting characters. Flawed you might say. What is different about them compared to the other protagonists and antagonists in the story is that they make mistakes and regret it. They have motivation. Basically they're the ones who are the most like real people.

As a child there was kind of an expectation that I should like the good characters. Yet reading Lord of the Rings I preferred Gollum to Frodo. I felt bad about that. Did it mean I was a terrible person? 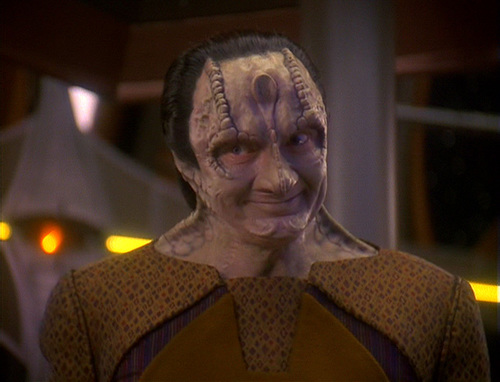 As I got older I realised that I wasn't (or at least not for this reason). I was drawn to characters who were not only complex and more realistic, but who were at odds with the world around them, who didn't quite fit in. Was this because I felt that I didn't quite fit in? Possibly—although I am fully aware of the fact that every teenager thinks they're different and that no-one understands them before discovering as an adult that there are millions of people just like them and they're nothing special...

Yet despite going through this reality epiphany myself, I remain more sympathetic to the imaginary outsiders, the people who make mistakes.

Not everybody feels the same way about their fictional characters, something that came as a surprise to me when I first got involved in the nascent online fandoms for TV shows in the 1990s. I was a big fan of Star Trek: Deep Space Nine possibly because its dramatis personae had a larger than usual number of these morally ambiguous figures. Anyone who knows the show well can probably guess who one of my favourite characters was. Garak the tailor/spy of course, played to perfection by Andrew Robinson. He lived on the space station with the protagonists but had an agenda of his own. He was a Cardassian—the main antagonist species of the show—but was an outcast from that society. A man who thought the moral of The Boy Who Cried Wolf was "never tell the same lie twice". Garak centric episodes were always going to be good.

So I was astonished when subscribing to the Usenet group alt.tv.star-trek.ds9 to discover that a lot of people hated him. Quite vocally. They thought he should be locked up or killed.

I suppose different people enjoy fiction in different ways.  A more modern example is Breaking Bad - I was always following Walt's story (even though my emotions went from hoping he wouldn't get caught near the beginning to hoping that he'd stop making bad decisions and learn some humility and empathy for other people by the end). Yet from reading analyses online, some people were on Team Hank from the start.

Of course it doesn't mean that I can't admire some heroic characters. I have always been a big fan of Doctor Who for instance, more obviously intended to be a "goodie". And yet they've always been flawed, which for me is the most important part of the character. I'm less interested in the Doctor when presented as a messiah analogue. The show's at its most dramatic when the lead makes mistakes - or is outmanoeuvred.

Not all characters are going to appeal to all readers or viewers.

I'd like to think that Genie and Wendi (two of the main characters in Comeback) are flawed but sympathetic in the way that appeals to me - and hopefully you. That you'll like them not despite their flaws but because of their flaws. And the efforts they make to overcome them.

The only way for you to find out of course is to read the novel - and the only way that's going to happen is if we hit our target! We're a quarter of the way now - if you enjoyed reading this, have a look at the extracts on this site and if you enjoy them too, why not pledge? Of course if you've already pledged—thank you! But while you're here can I perhaps ask that you please try and talk others into it too? If each of you persuaded only one person to take the plunge at the lowest pledge level it would still make a huge difference!