As I mentioned before in another blogging arena, as a child I was obsessed with the London Underground. I don't remember this obsession starting but it must have been very shortly after we moved to London when I was three. Some combination of the bright colours and simple lines of the famous map and the experience of travelling on the (then) futuristic Victoria Line must have chimed with me and laid itself down permanently in the still neuroplastic pathways of my child's brain. The dull grey metal fronts of the 1967 stock tube trains with the permanently surprised and worried expressions are burned into my memory. 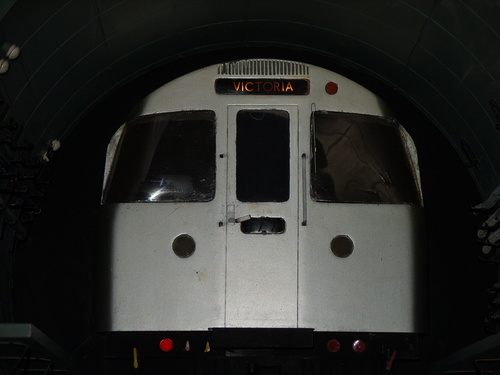 Now that I come to think about it I was equally enthralled and scared by the tube. I used to have semi-recurring nightmares about the platforms inexplicably getting narrower and narrower until I fell onto the tracks. As such I always found island platforms particularly frightening, so much so that even now travelling on the Glasgow subway (most of the stations on which have very narrow island platforms) gives me the heebie jeebies, a peculiar subterranean vertigo that makes the soles of my feet tingle.

Given this fatal fascination the Moorgate Tube Disaster was something that also obsessed me at the time, probably one of the first negative news stories I followed closely (up until that point I'd only been interested in coverage of the American space programme). I tried to imagine what it must have been like to have been in the train as it failed to slow down once entering the station and even now the sinister phrase "blind tunnel" has an ominous resonance in my mind.

The combination of fear and appeal is a potent one and it's no surprise that I still have dreams about the London Underground, dreams in equal part exciting and alarming, dreams in which I have to make my way through the tunnels to the adjacent station before the next train comes along, dreams in which some of the passageways between platforms are too narrow to pass through, dreams of secret platforms and extra lines which I've somehow missed before.

And often dreams of the ancient wooden escalators that used to grace many of the stations on the older parts of the network, creaking steampunk affairs that I was always slightly afraid of. What would happen if my shoe laces got caught in the teeth at the bottom - would I get pulled into the mechanism and chewed up? 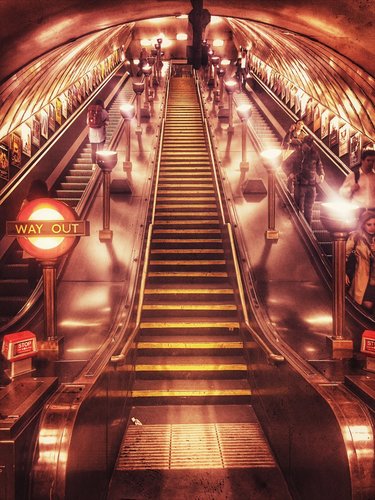 If you've read the extract from Comeback on this page you'll see that one of those escalators made it into the novel, fittingly repurposed as one of the entrances to the Underworld.

I was tempted to put more of the Underground into my Underworld but the tube already has a history of being used as the setting for urban fantasy novels, from a number of memorable cameos in Ben Aaronovitch's Rivers of London series to a leading role in Neil Gaiman's Neverwhere (some might say the definitive work on the subject of the fantasy tube).

Nevertheless, I still have a number of Underground stories in me and perhaps I will one day write my own take on the mythos, a tale concerning all of the imaginary lines that appear on the famous map in my dreams, the hidden escalators and lost platforms I find myself on when travelling between sleep cycles. The old red trains I remember from childhood which had been running since before my parents had been born.

But that's another story. In the meantime Genie's escalator connection will have to do - and there is of course more to it than appears in the extract here. But to find out what that is you'll have to read the novel. And in order to do that.... well you know what to do!