Editing a work of fiction can be a laborious process. I'm not just talking about correcting the spelling and grammar. There are many other bad habits that sneak in. These aren't technically incorrect but they dilute the overall quality of the work. 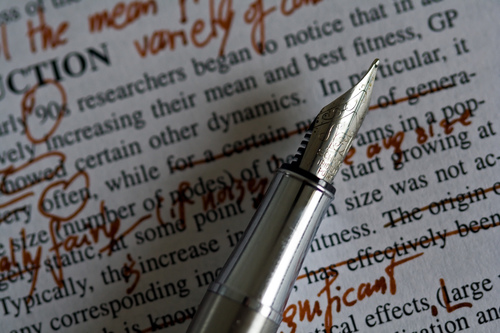 For a start there might be words and phrases you habitually overuse. I've noticed that far too often my characters glance at something, or get from one place to another by trotting. I'm also over fond of the word whilst. While (see I can restrain myself) there's nothing wrong with having a personal style, these things can bog the text down and make it all a bit samey.

There are other bad habits that can occur in grammatically correct text—stylistic things that you probably aren't even aware you're doing. The most common of these is what is known as Filtering. I was very guilty of that until it was pointed out the first time I came up against a professional editor.

Filtering is using words—usually verbs—placed between the reader and the experience of the point of view character, the practical upshot of which is to increase the mental distance between the two of them. This isn't a good thing—the reader should be drawn into the story, the words almost invisible as the story is experienced. A couple of examples follow.

The latter is more immediate. As she is our point of view character, we are already with Genie, so we know that it's her doing the feeling. Feel is the filter word I suspect I misuse the most. Another is Notice.

As they headed onward into the forest, Genie noticed that Nathan was walking a little closer to her than he had been earlier.

As they headed onward into the forest, Nathan was walking a little closer to Genie than he had been earlier.

As we're in Genie's head throughout the book, we know that this is something she's noticing.

Ever since first having this kind of thing pointed out to me, I have assiduously combed through everything I write, stripping the filtering out. There's often a lot of it.

There are many other rules like this to improve otherwise grammatically correct text. Beware of overuse of adverbs. Look at jargon with suspicion. Avoid clichés like the plague. Removing a large proportion of these from a text can make a remarkable difference to its quality.

It's just a shame that you can't edit real life. The way some people speak wouldn't pass muster when placed before a competent editor. These kinds of abuse often occur when the perpetrators are using words to make themselves sound more important—and so are very often encountered in the workplace.

One that particularly winds me up is the misuse of myself or yourself. Strictly speaking these Reflexive Pronouns should only be used when the subject of a sentence is the same as the object, namely I do it to myself or You do it to yourself.

Anything else is wrong and probably done in a misguided attempt to sound more official or correct in much the same way that some fictional Victorian Londoners are depicted as adding an H to the start of words that begin with a vowel...

They were afraid of dropping their Hs so overcompensated.

Similarly those who abuse reflexive pronouns are probably worried about sounding overfamiliar or informal if they simply say you, I or me.

Is that for yourself, Sir?

There's a similar sensitivity to using me (sentence object) which results in misuse of I (sentence subject) thus:

If you could kindly give that to my husband and I...

Sounds OK until you imagine that the husband isn't present which changes the sentence to:

If you could kindly give that to I...

It has the opposite effect to the one the speaker was hoping for—now they sound like a comedy yokel. There's nothing wrong with using me here. It's not self-centred or unsophisticated. It's just correct.

There are many other abuses committed for the same reason—to give the speaker imagined gravitas or authority. Business Speak means never using one word where three will do and converting nouns to verbs and vice versa without a second thought.

These kind of abuses don't have a place in fiction either—unless a character is one of those people in which case they could probably be rather fun to write...