As a child I was obsessed with many things. Continental Drift was one of them.

I suppose it stemmed from my love of maps, especially maps of imaginary worlds such as those found in the front of fantasy novels like A Wizard of Earthsea, Lord of the Rings or some of the Narnia books. I always thought it was a shame that no map of the Great Eastern Ocean was included in The Voyage of the Dawn Treader, but in retrospect that makes sense—it would have been mostly blank. 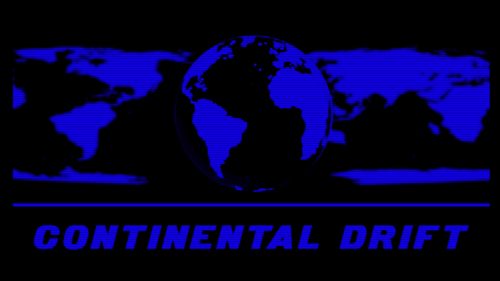 I would spend hours drawing my own maps even though I don't think at any point I was planning to write an epic fantasy. I just liked drawing the maps. Some of them had peculiar features (probably inspired by The Isle of the Ear and The Hands from the Earthsea map) and all of them spanned continents, although I don't recall ever drawing a map of a complete planet.

This was an odd omission given how obsessed with space I was. I can only surmise that for some reason I didn't like mixing these particular manias. Mixing others was fine—the Fantasy Maps and London Underground enthusiasms were mashed up many times as I drew transit system maps for imaginary cities. Years later I was enthralled to read about New Crobuzon in China Mieville's Perdido Street Station and thought it was a shame that there wasn't a transit map included in the book. Someone else must have thought the same, because now there is.

I have toyed with the idea of drawing a map for Comeback—some kind of take on Dante's Inferno, consisting of concentric circles—but never quite got around to it. Genie's journey is linear enough for it not to be required. However, oddly enough I have come closer to drawing a small scale map for the follow up to Comeback - even though that novel is more or less set in the real world.

Back to Continental Drift. I think what captured my imagination was the fact that these maps looked like fantasy maps and yet contained hauntingly familiar elements which would pop up every now and then. I was fascinated by the way South America and Africa fitted together neatly—so much so that I clearly remember tracing them from the atlas, cutting out the tracings and sellotaping them together.

What was almost as good was the way that these outlandish continents had names. Pangaea, Gondwanaland, Laurasia, Laurentia, Baltica and Avalonia.  Separated by seas called Iapetus and Khanty or surrounded by the great Panthalassa Ocean.

What I particularly liked was the way you could see the evolution of the world over time as the continents slid into the positions so familar from the BBC One continuity globe. But there was always something missing. In the pre internet age of course I had to rely on books and even amongst my own collection of books about prehistory—plus whatever I could find in the library—there was no depiction of where the continents would go next. True there were some descriptions in the text but that wasn't quite the same thing.

Then one day—I am sure I was almost a teenager by this point—a glossy book turned up in the school library which did depict the Earth some thirty million years hence. It was all rivetting but what particularly stood out for me was the way that Africa had pivoted around the Middle East towards Europe, giving rise to the Mediterranean Mountains and the Red Ocean.

Even today with the vast resources of the internet available to me, there aren't quite enough illustrations of the future Earth around, or at least of the right kind. A quick google for Future Earth Map does reveal thousands of images, but few of them agree with each other and half of them are simply based on today's continents with changing international boundaries or rising sea levels drawn in. But I think the real reason they don't satisfy is that none of them comes close to Future Earth Map that I had in my head when none were available and I had to draw my own. These self drawn maps were closer to the fantasy maps of imaginary worlds I also drew - and included arrays of names mashing up the present day global gazetteer.

The real challenge of course would be to write a novel set in this future world. But that can wait for another time.