Despite some people finding them dull, I find dreams endlessly fascinating.

I have written here before about how "and it was all a dream" is unacceptable as a denouement in all books aside from the two Alice novels. However, that set me thinking. What if it was all a dream? I'm reminded of something I thought when I was a very young child.

In the early seventies there was a BBC exhibition at the Science Museum in London. I have since discovered that it was officially known as the BBC tv Special Effects Exhibition but as a child I just thought of it as the Doctor Who exhibition as there were going to be a lot of Doctor Who exhibits there. 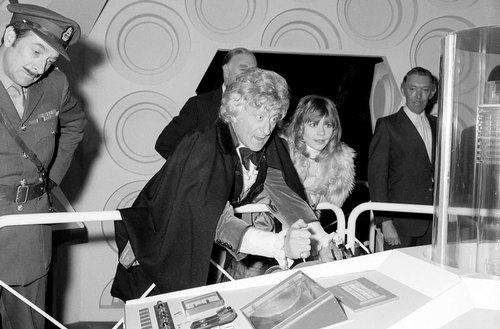 The night before we were due to go I was so excited I had difficulty falling asleep. When I did I had a couple of dreams about going to the exhibition. Eventually the real morning came. I seem to recall it being dark and cold and having to get up unusually early, but this is no doubt the memory of another exciting event - say of going on holiday or something - being conflated.

I don't remember the journey to the Science Museum but remember parts of the exhibition very clearly. The centrepiece was the TARDIS control room, far bigger, brighter and more in colour than I had ever experienced it before. The central console itself was fenced off which was a shame, but nevertheless just being there was unbelievably thrilling. Against one wall was a futuristic computer bank with two tape reels on it - I'd never noticed this on television but nevertheless always included it in any drawings of the TARDIS interior I did thereafter.

At one side of the room the TARDIS doors opened onto some kind of balcony. On it, behind a guard rail, sat two Daleks within some kind of cave, ranting about extermination and disintegration. Me and several other children crowded around the rail. I was convinced that when I waved at one of the Daleks it had swivelled its eye-stalk to look at me; I mentioned this and all the children started waving trying to attract its attention.

I don't remember much about the rest of the exhibits aside from a small model of a scene from The Dæmons in which the heat barrier featured in that story was represented by a semicircle made of tinsel. I've long since lost the TARDIS Commander badge given away at the exhibition but remember being slightly annoyed at the concept (even at a young age I knew the Doctor was a freelancer who had no time for commanders) and at the proportions of the TARDIS depicted on the badge (it was too squat).

That evening I was upset that the whole thing was over. I wanted to go all over again - or rather I wanted to have not been yet and to still have it all ahead of me. I remembered the dreams of the previous night. What if today had been another dream and I had yet to wake up on the exciting morning of the actual visit to the Doctor Who Exhibition?

Even after another night's sleep this fancy stayed with me. I was young but had already experienced recursive dreams within dreams and knew that you could go to sleep while dreaming.

Of course if the past forty plus years have all been a dream then it means I made it all up and that this isn't what adulthood is like at all, it's just what a child's idea of adulthood is like. I imagined it all from Thatcher to Trump, from Blake's Seven to Game of Thrones, from getting a job to unemployment benefits, CDs, anti-depressants, the internet, goth, Toyah, what coffee actually tastes like, all Doctor Who stories after Jon Pertwee,  what getting drunk is like and all the people I've met since then, friends and enemies alike. Perhaps this is why I'm not in touch with anyone from back then.

I hope I can remember it all when I wake up. It would make a cracking novel.

Pledges seem to have come to a standstill at 25% so if I could ask each pledger to please consider talking just one friend into doing so as well that would be fantastic thank you! If you haven't pledged yet, I do hope you will please think about it. The minimum pledge level is just ten pounds. If this is all a dream what have you got to lose?