I've written about Alice In Wonderland on here before—it is one of Comeback's more obvious influences. Not only was the working title "Genie in Underland" but also there are many parallels within the story. Both protagonists undertake a journey that is notionally underground. Furthermore, Genie's long escalator journey at the beginning of the novel parallels Alice's slow fall down the rabbit hole ("Down, down, down. Would the fall NEVER come to an end?") Although perhaps not as much as Chell's fall down a shaft in the Aperture Science facility at the beginning of chapter 6 of Portal 2 ("Hi. How are you holding up? Because I'm a potato.") 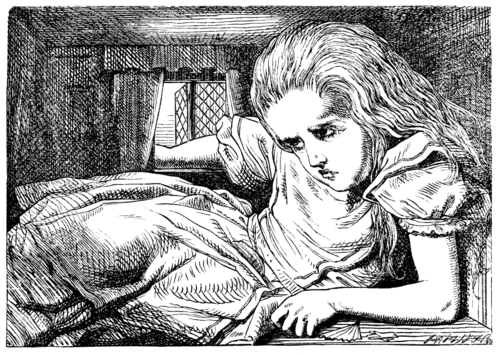 There are a couple of more direct references to Alice in Comeback as well, the spotting of which will be left as an exercise for the eventual reader. The major difference though is that unlike Alice in Wonderland, Comeback is most definitely not all a dream.

Despite this, one of the things I did want to capture in the underworld sequences of Comeback was the surreal quality of dreams or of simply being very tired. Some of the most interesting things to happen to me in childhood happened on the edge of sleep. The myoclonic twitches as I imagined I rose from the bed just after losing consciousness which would jerk me back awake; the parade of psychedelic protozoa which marched across the dark red screen of my mind's eye as I tried to lose consciousness (fuzzy Day-Glo pineapple rings and evil amoebas amongst many others).

There was one particular thing that happened when I was tired but resisting going to bed—and so more often than not against the ostensibly normal background of the living room with the TV burbling away in the background.

People's heads would suddenly go small. This was usually one of my parents coming in to tell me it was time to go to bed. I'd look up at them from my position lying on the floor in front of the TV (funny how we no longer watch TV like that as adults) and their heads would recede as if viewed through the wrong end of a telescope. Some Henry Moore sculptures remind me of this.  The odd thing was if I tried to examine this strange situation in detail I could see that their heads were in fact simultaneously the correct size and unusually small which resulted in my perception flicking back and forth between the two viewpoints unimaginably rapidly.

I was often secretly pleased to be going to bed when I was this tired although as a child I would never have admitted this—as a pre-teen it's the law that bed is to be resisted at all times. After a shrunken head session I'd fall back into bed and sink quickly through the layers of sleep down into the depths.

It never occurred to me that there was anything unusual in this phenomenon. I rationalised it simply as being tired and imagined that everyone saw tiny heads in this situation.

Apparently not. It is only very recently that I have discovered that this is actually something called micropsia, a subset of a neuropsychological condition called Alice in Wonderland Syndrome...

There are a number of reasons why this condition occurs, but it seems that migraine is the most likely cause of mine as I have always been prone to them. Reading up on Alice in Wonderland Syndrome it also appears to explain some of the more disturbing and indescribable recurring nightmares I used to have when things simply went "wrong". For a long time I have tried to put them into words; they do perhaps make a brief appearance in Comeback but I held back their starring role for the sequel, Ghostdance.

Of course if you want to read about them, you know what to do... All pledges, however small, are gratefully received. If you've already pledged then a huge thank you! Why not persuade someone else to pledge too?

It would make my dreams come true. But not those ones.