One of the problems with this daily advent writing is finding the bloody time for it. There just doesn't seem to be enough of it at the moment in general and what there is gets taken up by work work, housework, shopping, general life admin and sleep. A social life doesn't even get a look in nowadays.

However, I suspect some of this is an illusion, caused by the mind. For instance, a few years ago when I took part in NaNoWriMo I not only was holding down a full time job but also travelling from Brighton to Manchester and Birmingham to watch gigs. I still clearly remember sitting in a cafe in New Street Station making sure I got my 1667 words done for the day.

So what has changed? Perhaps I'm older and tireder. I think some of it may be anxiety based - once I've done the writing for the day I'm fine, I feel good about it. I wonder just what it is about it that I found so difficult and why I put it off. But that's procrastination for you. It may have taken me a while to get around to writing this update but the flat's spotless. 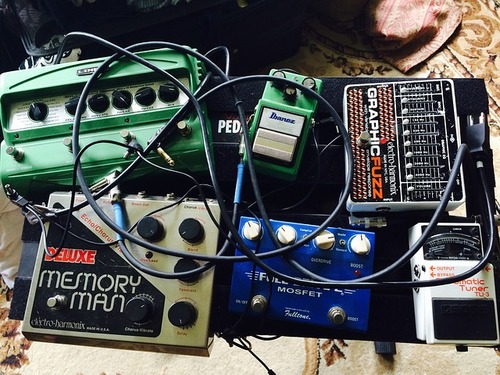 Ten minutes later both women were looking intently over the balcony.  They'd pushed the table back from the edge and lined their chairs up next to each other, sat down and leaned over the railing, armpits and chins resting on the grimy metal bar.

Genie's legs were at an angle, knees pressed right up against the balcony wall. Under normal circumstances this would have been uncomfortable but right now her spinal column tingled with excitement, anticipation and the effects of the drug she'd just taken. Even the numbness at the back of her throat was thrilling.

She turned to look at Wendi. The smaller woman was kneeling on her chair which she'd pulled closer to the edge and waving her arms seemingly at random through the empty space in front of the balcony as she talked.

"See that pedal? I remember when Peter bought it, just a few doors down actually, and I made the guy in the shop give him a discount cause it was scratched even though I did it."

Genie had no idea to which pedal out of the impressive array that adored Peter's station on stage Wendi was referring, but smiled and nodded anyway. She loved the sound of Wendi's voice, especially at a time like this, and the improvement in Wendi's mood had a knock-on effect on her own.