I recall blogging about this once before  - nearly ten years ago now! - but obviously not on here so I suppose it's fair game to repeat myself on this occasion.

The two main methods used for writing seem to be architecture and archaeology. Both starting with "arch" confusingly - from the ancient Greek archi (first) combined with tekton (builder) or logos (explanation).

The Architects (First Builders) plan their writing using index cards, spider-diagrams, post-it notes or, in these more modern times, software such as Scrivener. As such once they've finished planning they know the whole story before they even start to write it. The Archaeologists (First Explainers) on the other hand just start writing and are sometimes just as surprised as the reader by what they dig up.

It's important to state that neither of these methods is the "correct" one. What works for one person won't work for another. I've always tended towards the latter (though it tends not to work as well for short stories - there I often come up with the climax and work back from there).

It's particularly handy right now as I'm writing this extra scene without a clue - I understand the characters and the basic context but it's unknown territory otherwise.

That's why Wendi is so useful here. The first time I wrote her - also ten years ago - she started taking over and doing her own thing without regard for the role she had in the story. She did all the work and all I had to do was jot it down.

So all I need to do now is plonk her down in the middle of a scene and let her go... 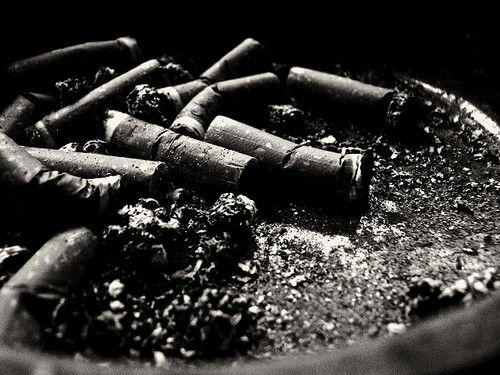 As Wendi dragged her through a doorway Genie banged her head on the lintel and found herself on a tiny wooden staircase, far too narrow for her. The steps creaked under her boots; this place was fine for someone Wendi's size but it was making Genie claustrophobic.

They emerged onto a balcony furnished with a few grubby tables cluttered with dirty pint glasses and full ashtrays. Wendi picked one near the edge and sat down. She pulled off her woolly hat and unzipped her jacket but left her shades on, letting them slide down her nose only a little.

Genie pulled a chair out opposite her and struggled to get her legs under the table. Once comfortable she glanced over the edge of the balcony. There below - almost within arms reach - was the stage. The band's amps and drumkit were already set up even though there was no sign of the boys.

Someone pinched Genie's knee. She looked across the table to where Wendi was staring at her over the tops of her shade, a smile on her face for the first time that day.

"Let's see if we can't improve the mood." Wendi reached into a jacket pocket and pulled out a baggie containing a couple of wraps made from manga comics.