Advent 6: End Of the Scene

I have been thinking; it's really time for me to end this sequence we're currently reading so we can get to another one tomorrow; somewhere from a completely different point in the book. That seems nice and neat; I am a  quarter of the way through today after all which means that if I continue using the same format I'll end up with four bonus scenes (plus day one which was more of a microscene and didn't link to the rest of what I've done so far).

Unfortunately I haven't dreamed any more short stories yet. Perhaps I need to write the one I did the other night to make space for a new one.

Back to Comeback. They've arrived!

Genie and her manager Malcolm have arrived at the Coliseum. 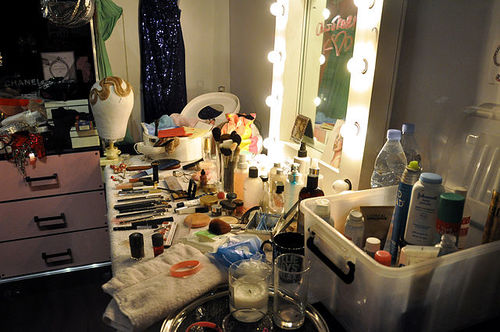 Holdall in one hand and costume draped over the other, Genie hurried after Malcolm up the steps and into the grimy red-carpeted foyer.  She now realised that from the décor this had once been a cinema. Malcolm tapped on the window of the box office and leaned forward to talk to someone. Genie wandered around a bit. The carpet was sticky.

“Ah yes, we’ve spoken.” Malcolm stepped forward and compressed Stu Jackson’s hand in an approximation of a handshake. Genie saw the young man wince and smiled. He smiled back. Kind of cute, she thought.

“Glad you could make it. I’ve just been filling your guys in on the dos and don’ts of the PA…”

“Sure. No worries. If you guys want to follow me I’ll show you the dressing room.” He ducked back into the Private door, holding it open behind him. Genie followed with Malcolm at her tail. The corridors were narrow and long, and she soon lost track of the turns Stu was making.

The dressing room was, cluttered with junk, large and brightly lit, one wall lined with mirrors in front of which a row of trestle tables and sets of drawers had been lined up. In one corner a rather sad-looking clothes rack slumped. A handful of orange plastic chairs completed the furnishings.

“I’ll just go and get you something to drink.” Stu was unaware of the shabbiness of the accommodation. Perhaps he was used to it. “What would you like?”

“Tea please,” Malcolm pulled one of the chairs out and made a point of wiping it with a handkerchief before sitting down, “Genie?”

Genie dropped the holdall and hung her costume bag on the clothes rack, which shuddered and creaked but just about remained upright.