And, as is the way of all very small children, I took that as gospel and for ages thought that the 23rd December's official name was Christmas Eve Eve. I even worked out the logic of it and begun to wonder if actually 22nd December shouldn't be called Christmas Eve Eve Eve.

These days Christmas and Christmas Eve mean little to me - there's none of that infant excitement remaining (and it was enjoyable even if a lot of it was linked to the anticipation of acquisition). I've even got to go to work tomorrow. It seems peculiar that some of the event Christmas TV shows have already been on or are on tonight.

But I did still wake up this morning with the thought that it was now Christmas Eve Eve. 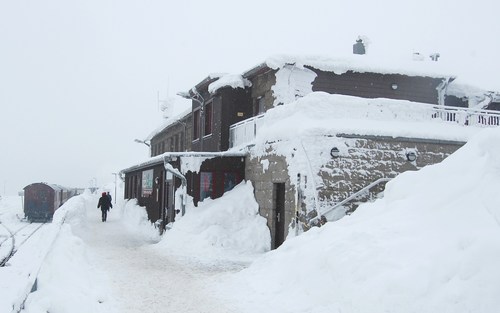 Wendi could have sworn that she wouldn't fall asleep again, but nevertheless was gently rocked back into consciousness by the motion of the train. It was now definitely daylight outside and the train’s motion was less frantic.

Wendi attempted to wipe the window clear with her hand but the condensation had frozen, tiny ice crystals scratching the soft skin of her palm. She pulled her shades from her jacket pocket donned them and stood up on her seat again.

The outside was just as cold as it had been the last time she’d stuck her head out of the window but that was the only thing this new experience had in common with it.

It was so bright.

The snow covered ground sloped away from her covered with conical snow covered trees, a Seasons Greetings card brought to life. Above the sky was a pale blue, streaked with thin tendrils of mist.

The train slowed even further; turning her head Wendi could see that it was about to come to a standstill at the terminus, a snow covered grey stone building with a low snow covered platform.

She jumped down from her perch, landing on the wooden floor of the compartment with a thud just as the carriage jerked to a halt.

The engine was hissing with relief at having finally made it to the summit.

The others stirred as Wendi grappled with the handle. The door swung open into the white and she leapt out.

(photo of Bahnhof Brocken by Olaf Meister at Wikimedia Commons)