One of the best novels I read last year was A Man Of Shadows by Jeff Noon. One of the features of the world in which it took place was the fact that the inhabitants of the city of Dayzone / Nocturna all carried around their personal timelines, changing and setting their watches accordingly.

I currently feel as if I am trying to live in several of those timelines at once, as if watches set at different times and speeds encircle my wrist all the way up to the elbow.

I alluded to time's misbehaviour only few days ago in these updates; it continues to confound. It hasn't helped that I've been working at home several days this week as well, that only conspires to confuse my body clock. Plus I'll be working (at work) on Christmas Eve. So Christmas Day itself is simultaneously days away and breathing down my neck and it's still a while until my birthday as well as only being a week next Tuesday (a quick reminder - as I mentioned on Day One of this venture it's on 1 January).

I have ages and I have no time at all. 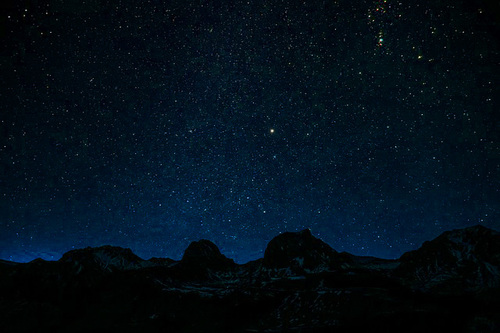 The carriage was still. Why had they stopped? In the dim light from the single 40-watt bulb in the ceiling of the compartment Wendi could see that all of the others were still asleep. Nigel was snoring.

The window was thick with frosty condensation. Wendi wiped at it with her left hand, the bite of the chill waking her still further.

Outside the horizon was a pitch-black jagged line set against a deep blue.

There was a distant hissing but aside from that and Nigel's snoring she couldn't hear a thing. She clambered up onto the seat and slid the top of the window open, sticking her face into the wintry gap.

Free of the filter of and reflections in the glass, the outlines of the mountains were sharper and even darker.

The sky was not so uncooperative. The cloud cover had cleared since they'd set off and a frighteningly large amount of stars were visible in the firmament, a sight that sent a wave of goose bumps down her neck and the backs of her arms. The universe. She'd been there before.

"What is it? What d'you want?" she shouted into the night.

As if in response the hissing increased in volume and the steam engine began moving. Banging her chin on the metal window frame, she pulled her head inside and dropped back into her seat.

The others murmured in their sleep and Nigel stopped snoring. Outside the window the dark blue of the sky lightened almost imperceptibly as tendrils of mist flickered past. Banks of fog clung to the mountainside, dark pools of emptiness that reflected nothing.