So we have arrived in the 21st December, which in the Northern Hemisphere means it's the shortest day. The actual moment of solstice itself comes at 11:23pm during the night - which brings up the thought that while you often hear the winter solstice being referred to as the shortest day it's less often that it's flagged up as the longest night, even though this is equally true.

Thinking of it as the longest night is more positive as well - you're being given more of something, not being deprived of something. For night owls this day should be the highlight of the year.

This time around we even have a full moon to accompany the longest night. If we get clear skies (looking unlikely at the moment to be honest) then it'll be the goth equivalent of a long hot summer day - a long cold winter night. 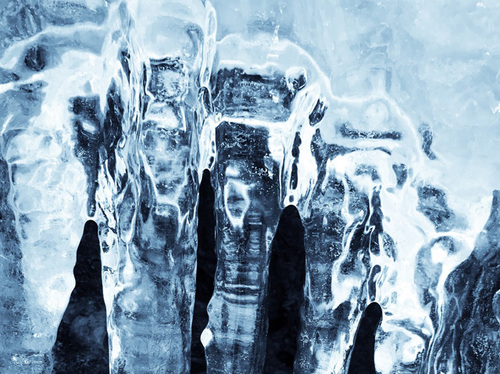 The reddish brown clay was back but was less suffocating than normal, itself seen though ice. Wendi could feel it behind her, dragging at the back of her mind but the pure white of the mist in front also had its tendrils about her brain. She shook her head, preventing the old madness from getting a proper grip. She was hanging in the centre of a crystal made from pure light; she spun forever burning her thoughts on the illumination. The creatures back in the clay were mirrored in the bright mist, anti-shadows that danced before her and tore at her sense. This was a different flavour of fear, as irrational as the recurring nightmares but thrown into sharp relief by the illumination all around.

Come to us, retreat, you don't really want that, give in...

It was the first time Wendi had ever heard any of the nightmare figures speak, but somehow she knew that this was what they had been always telling her, sly lies slipping from their invisible tongues straight into the lobes of her brain that controlled addiction. It would be so easy to give in to the encroaching madness - and that was why it was so frightening. Give in and she would be lost forever, the self and persona she had built up over the past quarter of a century swamped by the chaos of the infant mind. That was what these creatures wanted. To succumb to the chaos would be to grant them victory, another mind conquered in their campaign to... what? Wendi didn't know but she did know she wasn't going to give in no matter how wrong reality had become, how upside down and eternal, how she was looking down at a map and the map was her and the idea of borders that had been there forever but had only just appeared, things ancient and old waiting for her not after death but before birth.

There was a thud and her forehead banged against the glass. She forced her eyes open as the strange interior of the train carriage came back to her.