I had one of those dreams again last night. Where there are two of one person - but you don't actually notice. Or rather you think, "There's Person X oh and there's Person X as well." Sometimes you think, "Oh Person X just told me this - I should tell Person X, it sounds like it would be right up their street!"

It's always most peculiar especially the way that—within the logic of the dream—you don't even question it.

It's usually other people who are duplicated in this way in these dreams. But I wonder what it would be like if there were two of me in a dream and I didn't realise? 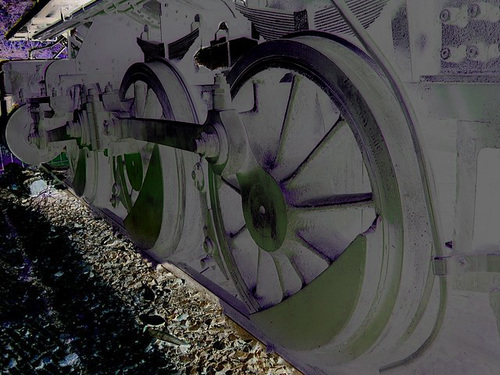 Clouds of steam rose from the engine at the front of the train. This was what Sean was excited about. It was a steam train, the archetype that always came to mind whenever Wendi thought of trains, despite the fact that she'd never seen one before. The Science Museum in London didn't count, despite how impressive they'd been close up and how small and vulnerable they made her feel, they'd been carcasses, gleaming and polished, mounted as trophies in the hall of the museum. Whereas here...

The engine was dirty and smelly. Dangerous. Sean stopped to admire it but Wendi dodged past him and continued to follow Hans closely. The sooner they had this sorted out the sooner she could sit down again and possibly get back to sleep. Now that the nightmare had evaporated she was keen to resume unconsciousness.

Ten minutes later Wendi climbed up into the carriage and dropped into the window seat in the compartment. The sky was still pitch black. Their destination was the top of the mountain which loomed over the town and yet despite its close proximity the train would take over an hour and a half to get up there winding its way through the foothills and looping around the summit before arrival. Wendi closed her eyes. The others bundled into the compartment and slammed the door. Someone sat next to her, the nylon of their coat hissing against the seat. She didn't care who it was. Her head lolled to one side the cold glass of the window pressing against her forehead. She didn't mind. Now that sleep had been cleared of the infestation it was an alluring prospect.

The carriage shook and jerked as the train pulled off, the sound of the steam engine so familiar to her despite the fact that she'd never heard it in real life before.