I haven't done it for a while but there is something exhilarating about getting up exceptionally early in order to travel somewhere. Everything is new.

For a start you're definitely not still in the previous evening. You have slept. And yet this is not the normal world you encounter on waking. It bears a superficial resemblance to the world seen at the end of a long night out but there's definitely something very different about it. It's cold and dark and your footsteps echo just as much - but it really isn't the same place.

Oddest of all you actually can see people occupying this world as part of End Of The Night Out Space—staggering and shouting—but they are at one remove from you in Up Very Early Space; they're in a parallel universe to which you don't currently have access.

And there are the people who spend time in this world, such as the railway station staff member who unlocks the gates at 4am allowing you onto the platform (or more frequently these days into the area from which the Rail Replacement Bus Service will depart). Your breath clouds in front of your face. By the time you reach the end of the journey you'll be back in another normal day, but for now just enjoy the difference of the Early Hours. 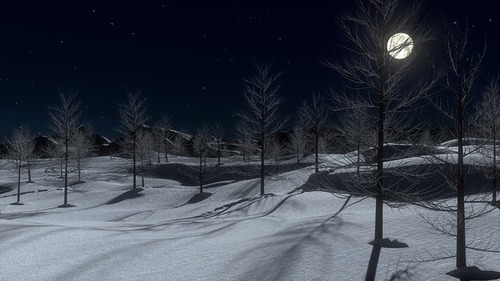 Wendi ripped her eyes open. The dream's logic hung about her head in a cloud and a whimpering sound emerged from the back of her throat. Where the fuck was she? None of this made any sense. Shapes moved in front of a blinding white darkness and it was oh so cold. Very cold.

She was sitting in the back of the tour van. The side-door was open, revealing a snow covered car park. Peter leaned in towards her.

"Hmm." Wendi didn't trust herself to speak, not yet. She unbuckled the seatbelt and jumped out. The snow crunched under her boots and the atmosphere of the dream began to leave her, impotent against the force of such a wintry new experience. The handle of the van bit at her bare fingers as she slid the door shut again. She caught her reflection in the curved glass; under the bright arc lights her purple hair stood out like a flare. Behind her the other members of the band stood, plumes of breath blooming from their nostrils, bundled up like arctic explorers.

This would make a good album cover, thought Wendi, zipping up her leather jacket.

"Sure you don't want your gloves?"

Wendi shook her head and stuck her hands in the pockets of her black jeans. She hated gloves. They made her clumsy, they were a layer between her and the world and she didn't need that. She jogged across to the middle of the car park shedding the last few fragments of nightmare. The still falling snow added an extra layer of silence to the experience.