Advent 17: The Reality Of Nature

Everything that we see, hear and understand about the world around us isn't necessarily the truth of the matter. Each of us lives in a model of the universe inside our own skulls, a model shaped by our memories, our experiences and most of all by the pattern recognition algorithms our brains use to make sense of the sea of sensory data pouring in through our nerve endings.

So in reality no two people will ever agree one hundred per cent on the way the world is.

Can we ever know the truth? In order to observe, report back on and record the nature of reality we have to use the pattern recognition areas of our brains and while these may be very accurate when it comes to lines, circles, edges and movement, how we recognise the more complex parts of the universe is always going to vary and therefore be inaccurate by the very nature of the instrument we're using.

On a microscopic level the universe is a whirling cloud of probabilities phasing in and out of existence. And on a macroscopic one it is (to all intents and purposes) simply an unimaginable number of rocks turning over and over in the dark forever.

What we think of as the world is all in our heads. So when it comes down to it we are all the authors of our own fictions in which we are the protagonists. 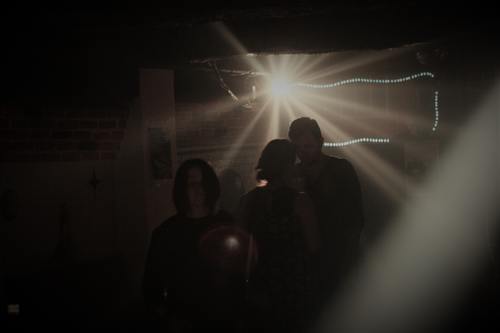 As they launched into the first song Wendi was still out of sorts. She still gave it her all but her mind was at one remove from the room she was in, watching herself from a mental distance - still in her head but detached and clinical, once again split in two as her real self watched her Persona self - or was it the other way around?

The audience were bouncing up and down, crammed together near the front of the stage, all trying to get near her. It reminded her of the early days eight or so years ago in London, playing the Bull & Gate and the Falcon to similarly heaving crowds.

At the back of the room though - what? There were dark shapes staying next to the wall. Journalists? A & R?  Then she saw how they moved and she shivered.

They flowed from one site of the room to another and no-one else was aware of them. Even though she couldn't see their eyes Wendi knew they were fixed on her, knew what those eyes would look like.

Eyes similar to the ones she sometimes glimpsed in the mirror...

(Photo by Jaison Switchblade from Pexels)