We all remember certain dates, the birthdays of our immediate families and loved ones, anniversaries of one sort or another (both positive and negative), official days of celebration. But sometimes other dates become engraved in our memories, often because an exciting event is coming up, something we've been looking forward to for ages.

The odd thing about this second category is that sometimes we can forget what the event actually was, while retaining a residual impression of the excitement engendered when seeing the date. It's almost like a memory fossil.

The reason I am bringing this up now is that there are a number of these for me in December, including today. I couldn't for the life of me tell you what they were now. Special gigs when I was a teenager or in my early twenties? Possibly. The last day of school (always a reason to celebrate)? Could well be.

So let us celebrate these phantom feast days, these memory fossils. I raise a glass to 15 December. Whatever happened. 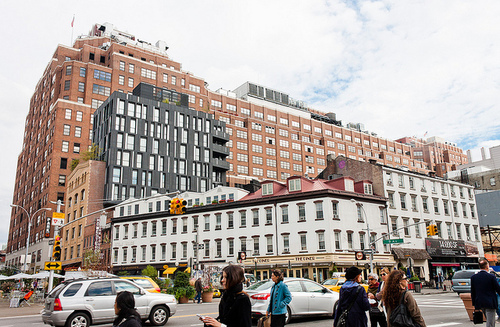 By the time the sun rose and the city's distant roar began to ramp up Wendi was wide awake, dressed and—having found no-one else awake—walking down Eighth Avenue by herself. It was 7.45am.

It was less busy than she'd have imagined. But of course. It was Sunday. The flight and the general excitement had knocked her sense of time out of whack, her brain jetlagged not by five hours but by twenty-nine.

The smell of dust and petrochemical fumes mingled with brewing coffee and the windows of the tall building flung shards of reflected sunlight into her eyes.

It was going to be another hot day.

The entrance to a subway station exhaled a gust of stale dry air and the sidewalk trembled under her boots as a C train headed south.

Wendi's stomach growled at her.  She'd never been much for food, but might make an exception.  There was a cafe over there on that corner.

She strode across the road and studied the menu which was framed by her reflection in the window. Not bad. She didn't have any dollars but there was always her credit card. She fished it out of her leather jacket pocket, licked the edge out of habit, and pushed the door open.

(photo of 111 Eighth Avenue by Kenneth Lu on Flickr)