It seems that these days I am condemned to forever wake in the night and then fear that I won't get back to sleep again. And yet come alarm time I could quite easily get back to sleep. So much so that I press the snooze alarm - something I always swear I won't do - and end up able to have quite complex dreams in the short time intervening.

It doesn't help that it's so dark in the mornings at the moment.

And it's only going to get darker in the mornings until the end of the month although the good news is that at least from today the evenings start getting lighter. Oddly neither occurs on the winter solstice, but that's the analemma for you...

Jet lag is another matter altogether. I haven't experienced it for a while now (two years ago I did fly to the furthest from home I'd ever been but peculiarly it was only an hour ahead time zone wise), but it can be very strange. 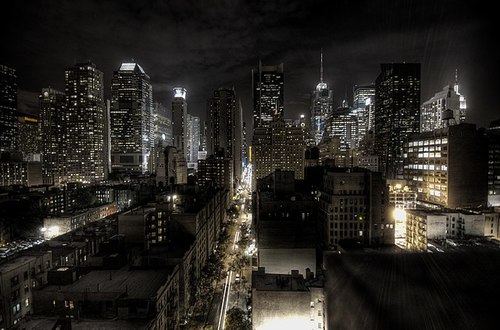 Wendi awoke to a background ambience that could have been a track lifted straight off a BBC Sound Effects Record - American City At Night (7'30").

The air was warm. No, it hadn't been a dream; she was still here in Manhattan. If she got up and walked to the window she'd see the lights of the city that never sleeps.

After the exhilarating afternoon and an out of control evening in the hotel bar they'd all been in bed well before midnight, which was unheard of. But this was Eastern Standard Time.

She tried to sit up. Nothing. Her eyes wouldn't open. Perhaps she was still dreaming? A dark chill flooded over her - she wasn't about to have one of *those* dreams again was she? She'd been free of them for over six years now, ever since that time away in Devon, that time when she had finally become her true self. She'd never looked back.

And what terror could they hold for her now?

Her eyes opened to neon-tinted darkness, the shadows of her dreams fleeing to the corners of the room. She flung the covers back and walked over to the window and lifted the corner of the curtain.

Normally she preferred to shut the night out but this was night she wanted to let in forever.