Sometimes I think I should go to the doctor and ask to have my ears syringed. Of course you may think that I am just going deaf in my old age, but interestingly (or not) when using headphones if I pull on my earlobes to open up the ear canals a little more the headphones suddenly get a lot louder. Sounds like canal blockage to me...

Of course it wouldn't surprise me if I did start having ear problems. When younger I would think nothing of standing next to the speaker in the Slimelight for half the night (in fact with regard to the group of friends with whom I'd go down there every week, that was "our spot").

Then there were all the gigs I went to and in later years, played at. It's true that you'd often see people in the audience, stage crew or bands wearing earplugs, but that always seemed odd to me - the equivalent of wearing thick sunglasses to an art gallery.

But then again, most paintings don't damage your eyesight. 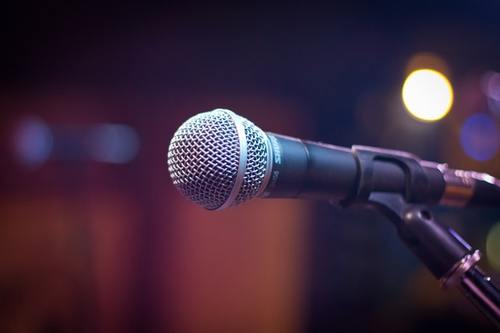 Fifteen minutes later Genie was on stage ready for the soundcheck, squeezed in behind the guitarist Peter. Despite the excitment still tingling through her nervous system she was keeping very still - one wrong move could bring the whole thing crashing down around her. Every time Peter turned to look at the rest of the band the neck of his guitar knocked against her microphone stand, causing sound man Jake to look up and frown.

There just wasn't enough space, let alone personal space. She was closer to Peter than was really comfortable - she could smell his deodorant and the odour was in danger of making her gag.

"Where is she?" Peter muttered, squatting down and fiddling with the settings on his pedals. It seemed Wendi had gone missing again.

"Never mind. We can get on with it until she arrives." Jake was still frowning, but not quite as much as before.

Everyone looked up. Wendi was standing on the edge of the balcony above them, surefooted and confident. Despite how ridiculously low the balcony actually was, Genie was getting vertigo just looking up at her, nervous tingles shooting through the soles of her feet.