Thirty Years of Clowning about

Hello lovely subscribers. You look great. And my word, what a lovely blouse you have on (sorry Rik).

Well, here I am again, begging for money. Well, not quite begging. It's more me asking you if you like the sound of my new book and, if you do, would you mind paying up front for it? It's no worse than me asking to borrow a few quid off you. The price of a big pizza in fact. And as a reward for pledging your readies, you'll get a copy of the book plus your name listed in the book as a patron, where it will remain for all eternity. That's not bad for £10-£15 is it?

Cockerings is a book that has been a looooooong time coming ...

Back in the late 1980s/early 1990s - before some of you were even born I suspect - I shared an office at Hendon Police College with a chap called Chris Hale. We were members of the Met Police's training and curriculum design team and part of our workload consisted of writing scenarios for prospective promotion candidates to use as mock exams before they faced the real thing. These scenarios were called Knowledge and Reasoning Tests, or K&Rs. What we had to to do was set up a situation on paper and then ask the candidates to prove their mettle by identifying which, if any, offences were being committed and by describing what course(s) of action they would take. We did this once a month for several years. But then, responsibility for writing these K&Rs was taken over by the Home Office. This was good because it freed us up to do other work, but we also knew that we'd miss writing them as the K&Rs were the most creative and fun part of our jobs.

So Chris and I decided that we'd go out with a bang. For our final promotion class mock exam K&R, we would create the maddest, most ridiculous (though still possible) scenario ever. It involved a geriatric circus, a catastrophic fire, drunk clowns, a troupe of aged trapeze artists, escaped tigers, an incontinent elephant and so much more. The promotion candidates loved it. And, afterwards, I realised that the idea of a geriatric circus was just too good to throw away. So, with Chris's blessing, I wrote a short comic story about the circus and about Bozo the Silesian clown called The Big Flop.

Then, in1992 I expanded the story into a full-length novel called Pumps and Circustents in which the circus came up against a secret society. Here's a photo of the only existing copy of that novel (and written before I'd adopted the Cornish 'Stevyn' as a way to sift me from all the other Stephen Colgans worldwide).. 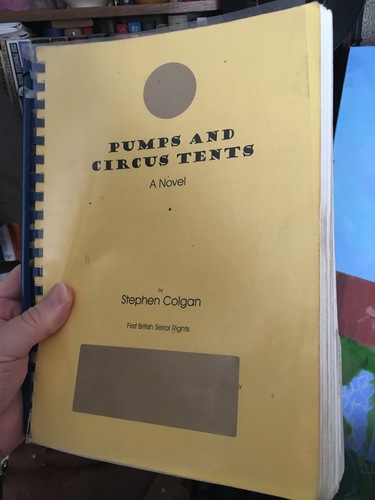 The reason that it's the only copy is that in 1993, I suffered a catastrophic hard disk crash and lost the whole thing - all 92,000 words of it! I was heartbroken. Thankfully, I'd printed it out. But it was a harsh lesson in learning to back up your work and I've never lost a file again.

The millennium came and went and I had an idea for a completely different novel that could involve Bozo and his circus of pensioners. Very soon it had evolved into a novel called Going Out WIth A Bang in which the circus got caught up in an armed robbery. I submitted it to my agent and he liked it. He then floated past the commissioning editors of several major publishers. And they all said much the same thing: 'We really like this'; 'This is well-written and very funny'; 'I loved every minute of it'. But then they also said, 'Unfortunately no one is publishing comedy novels right now so we can't see where to place it in the market. Can he write a Dan Brown type book instead?' I'll admit that I felt very disheartened and I returned to writing non-fiction for a while.

Then, in 2016, and having had several non-fic books published, I thought I'd try again. I had a new agent and he liked the book. However, he got the same response from trad publishers that his predecessor had,  except now they said 'Can he write a Scandi-Noir type book instead?'

So I pitched it to Unbound and they liked it too. But, more importantly, this time it would be the readers who decided whether it got published and not some nameless accountant. At last Cockerings, as it was now called, would be published! But then Unbound asked me if it was a one-off novel or part of a series and I told them about the other novels I'd written. After some discussion they decided that it would be prudent to put A Murder To Die For out first as it would hit two audiences at once: comedy and murder mystery. That would give me a greater chance of success, they said. And they were right - the book did well and was nominated for two awards. And then, because there were plot strands to tie up and stories to resolve, I had to publish the sequel, The Diabolical Club, which, curiously enough, ended up using left-over material - the stuff about the secret society - that had originally been in Pumps and Circustents way back in the Nineties.

In writing, all ideas are recyclable.

But now, finally, it's the turn of Cockerings to take its place in the spotlight. It's been nearly 30 years since Bozo and his aged entertainers first came creaking and grumbling into my life and they feel like old and much-loved friends. Our journey together has been bumpy, occasionally heartbreaking, but always entertaining.

All of which is why I am SO delighted that you've pledged to make this book a reality. And if you haven't, I hope that I've managed to intrigue you enough to do so.

This book means more to me than any other I've written because it's been with me for so long. Those who have read it tell me that it's the funniest thing I've written to date. I hope that's true.

And I can't wait to share it with you.

Have backed the book since I enjoyed the first two in the series! Disappointed, though, that a signed edition isn't on offer.

Hi David. This is being published on Unbound's 'digital list' which means that the book will be aimed primarily at an e-book audience, although paperbacks will be available. It's a matter of financial necessity, to be frank, as every book I crowdfund seems to take longer to get to 100% (I suspect that charity fatigue has set in!) and the amount I need to raise for the digital list is half what I'd need for the 'main' Unbound list (i.e. hardback, paperback, bookshop distribution, marketing etc.). Sadly, there isn't a signed book option on the digital list. That said, I know that some people like signed copies so I'll see if I can sort something out once the books go to the printers. Bear with me - I like to give people what they want if I can - Stevyn