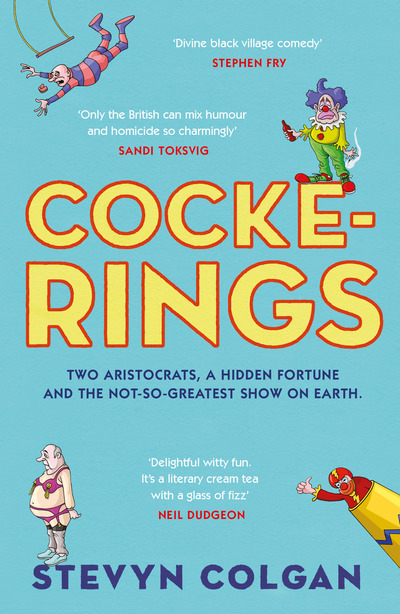 Crime | Fiction
You made Cockerings a reality. It's available in all good book stores now.
$15  + shipping
47 pledges

1st edition paperback, eBook edition and your name in the list of Super Patrons in the front of the book. EARLY BIRD price, only 20 available.
$30  + shipping
38 pledges

1st edition paperback, eBook edition and your name in the list of Super Patrons in the front of the book.
$40  + shipping
44 pledges

SIGNED copy of the first edition Super Patron paperback, with your name in the front of the book. Plus the ebook edition.
$55  + shipping
9 pledges

A ticket to the launch party in London, plus everything from Super Patron Level.
$150  + shipping
1 pledge

10 x 1st edition paperbacks, eBook with up to ten names in Super Patrons list in front of book
$225  + shipping
3 pledges

Name a character in the book (in consultation with the author) and everything from Launch Party level. Only six available.
$375  + shipping
1 pledge

The book features a geriatric circus full of aged performs. Create an act and name them and they’ll get a mention as well as an original illustration of the act. Plus everything from launch party level.
$750  + shipping
1 pledge

Thank you on a dedicated frontispiece in the front of the book. Plus everything from Read With A Friend level. Only 1 available.

Benelli’s Circus is on its last legs. The performers are geriatric, bookings are scarce and the owner, Benjamin Ellis, desperately wants to sell up and retire. However, thanks to a legal loophole, he can’t do so without his performers’ consent. And they won’t give it because the circus is all they’ve ever known.

Meanwhile, Berkeley Cockering, the Viscount Morbridge, is similarly frustrated. Despite being joint owner of a village, a brewery and several farms, he cannot sell a single property and realise his fortune without the agreement of his older sister. And she would rather die first.

Lady Marcheline Cockering is proud of her family’s long history but feels justifiably aggrieved that her greedy younger brother has inherited the title. To add to her frustration, Berkeley has no interest in tradition or duty and resolutely refuses to settle down and produce an heir. So when he suffers a heart attack, Marcheline decides that it’s up to her to save the family name. She must have a son and she sets out on a quest to find a suitable father.

However, Berkeley’s near-death experience has galvanised him into action. He will get his inheritance by any means necessary and he embroils Ellis and his tottering, threadbare circus in a wicked plot to foil his sister’s plans. If all goes well, he’ll get his hands on his inheritance and Ellis will be rid of the millstone that is his circus. However, their actions soon attract the attention of disgraced former Detective Inspector Brian Blount who sees one last chance for redemption ...

First came A Murder To Die For. Then The Diabolical Club. And now, Stevyn Colgan serves us up a third dose of savagery and slapstick among the green fields and picturesque villages of South Herewardshire.

Clowns were harmed in the making of this book.