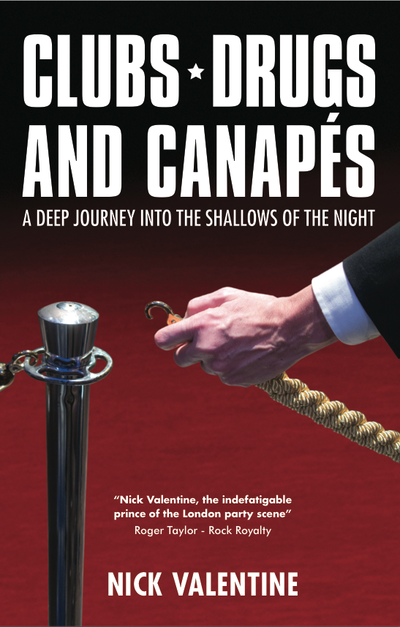 Clubs, Drugs and Canapés traces Nick Valentine’s story; just a suburban bloke who has blagged, lucked and laughed his way into just about every party, club, stage and hot-tub imaginable.

Introduced to the world of celebrity at an impressionable age when Steve Currie, bass player with the legendary T. Rex, moved in to Nick’s family home, Nick was star-struck and knew he too belonged on stage. He made his musical debut two weeks later despite making Sid Vicious sound like a virtuoso.

Nick then sailed through his teenage years and twenties as a paste-up artist, journalist, musician and DJ until he eventually banked in the shallows of canapé central, where he co-founded the Entertainment News press agency, attended over 5,000 parties and drunk enough champagne to test the Thames Barrier.

An enterprising period acting as a social PR further led to this self confessed dilettante co-founding three London nightclubs, including the much lauded, The Cuckoo Club. With the West End as his nocturnal playground, Nick then bid sleep a final fond farewell.

This account is a surprisingly touching look at the mechanics of enjoying life to the max. If Adrian Mole and Janis Joplin had a bastard love-child, his name might very well be Nick Valentine.