Inside the World's Best Classrooms 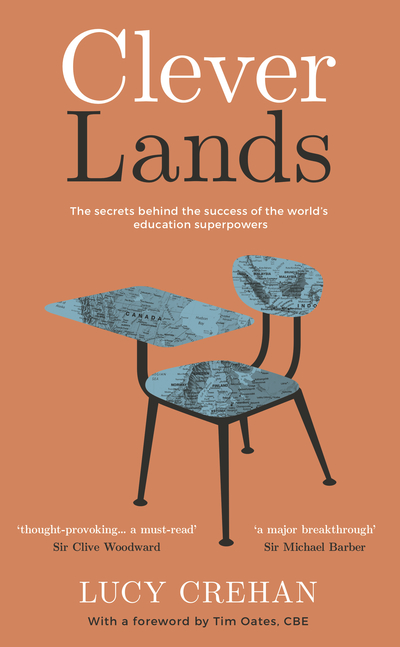 Business | Travel
You made Cleverlands a reality. It's available in all good book stores now.
$8
195 pledges

Signed 1st edition hardback, ebook edition and your name in the back of the book
$105  + shipping
4 pledges

Two tickets to the launch party, plus 1st edition hardback, ebook edition and your name in the back of the book
$225  + shipping
4 pledges

Six signed copies of the book and a Skype session with Lucy to discuss the book.
$600  + shipping
5 pledges

Everything up to the collectable level, plus Lucy will come and present at your organisation
$3,000  + shipping
1 pledge

I’ve spent the last two years learning about the best education systems in the world – from the inside. This book is about my journey, living with teachers, listening to parents and learning what education looks like in completely different cultures. It was a particular moment in a year 11 Science class four years ago that set me on this journey. They had their exams coming up in a few months, and we still had a lot of material to cover. Abdul, a boy who was quick to grasp concepts but slow to do classwork, put up his hand.

My first instinct was frustration. Here we were with the whole of the digestive system to cover by Friday, and he was asking me irrelevant questions.

“We don’t have time for that Abdul”.

He slunk back into his seat. On the train home, my only time for reflection, I worried about that encounter. What had I become? When did the interests of children become irrelevant? I thought that it might be when schools were threatened with takeover if they didn’t get the required number of C grades, and yet, we were told by politicians that this was the kind of thing they did in the ‘top performing’ systems.

In that case, I thought, maybe we shouldn’t be copying the top-performing systems. I signed up for a Masters degree, keen to learn more about how education systems could be run better, and discovered something that came as a shock: these countries were not doing what our politicians said they were doing. They were designing education in a completely different way, different from us, and different from each other. And yet despite their differences, they were all getting top grades in Maths, reading and Science.

I had to find out more. I read a lot of reports and studied a lot of graphs, but they didn’t give me any idea about what education actually looked like in each place, only about what policies were ‘officially’ followed (I know from experience that these are not the same thing). So I decided to go and have a look for myself. I emailed teachers in Finland, Canada, Japan, Shanghai and Singapore (countries which are regularly at the top of the education-superstar charts) and asked if I could come and help out in their schools. I spent at least three weeks in schools in each country, teaching, watching, listening, and asking lots of questions. The teachers became my friends. I stayed with many of them. And I came to learn what education is really like in these places.

In this book, I’ll take you on a guided tour of these education systems, painting a picture of school life, and making sense of the theories, facts and figures through the stories of real teachers and children. I’ll invite you to reflect on the goals of education in light of these varying possibilities, and provide you with some clues about how these countries came to be so successful.

Please pledge if you think this is an important book to ‘get out there’, even if it’s just so that politicians can’t keep making stuff up!

1st edition hardback and the ebook edition
View all 8 rewards