Twelve Days of Others #7: 'Fingerprints' by Sam Guglani 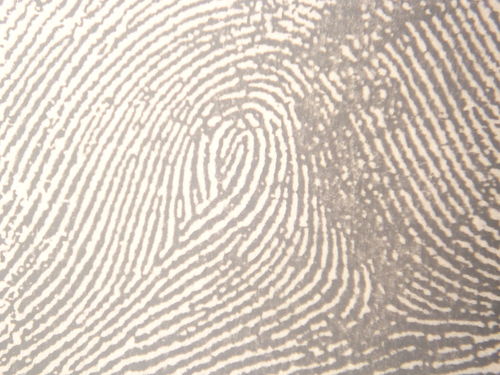 Look at how we start, like fortune-tellers, at the hands. Here by the window, where ward meets world, I examine this man’s, turn them over like found leaves. They're remarkable, creaseless, a baby’s, glass palms reflecting my own: now white, now brown. He laughs at my surprise. A tree surgeon’s hands, he says, my skin pressed into other life, its bark and blood, just like you doc I bet, your fingerprints handed to others. His hand shakes in mine, shakes mine. I listen to his heart. Not scared, he says, not of this anyway; but maybe, look, of that daytime moon, the lit rock of it, what it is, what it means we are. Or those starlings, did you see this morning? Against the sky like flung dust. I think our bodies are this, that we merge really, collide and become the breath of others. Here, he says, go on, have a whiff. My fingers drum his chest. Did you hear those sounds, he asks, from that comet, like whale song, mermaids? The ship they landed, its name, what, Philae? – it means end, or place’s edge, some frontier where things meet. That girl on my street told me when I dropped her a pound. She's like you, dark-skinned but sodden cold. Will you see her now on your rounds? Listen to her? It’s these distances I regret – enormous, tiny – their harm. I shine a light in his ears. Hard now to tell which of us is speaking, where the voice comes from. One of us says thank you. I go to wash my hands but, seeing them in the water, stop, turn, return to him.

Sam will be contributing a new piece to Others, an anthology celebrating how writers and writing can help us to see the world from other points of view. Read more from our contributors (including the rest of the Twelve Days of Others sequence) here. Please pledge your support now, and help us to raise funds against hatred.