Twelve Days of Others #11: 'Visitors' by Charles Fernyhough 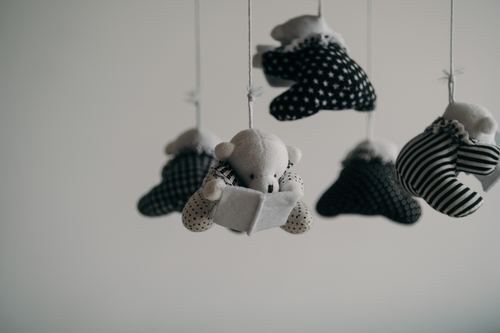 They came in the mornings, punctually at eleven, as she had asked them. They made smalltalk, inquired after the baby’s health, and said things like ‘Are you well today, Sarah, or are you not well?’ If they had been there at dawn, when Joseph was clucking out of sleep like bird-life, she would have been hard pushed to answer that question either way. By mid-morning, Sarah thought she had seen enough to know. Set yourself an achievable goal, the leaflet said. Allow yourself the satisfaction of a small job well done. It was called Understanding Your Baby, and what Sarah had learned from it was that she needed targets. Her visitors gave her targets. By the time she heard their voices coming up the stairs, she would have bathed the bairn, picked up his toys from the floor, brushed out the russetty tangle of her hair and lipsticked her big, sassy mouth with No. 7 Cool Vermilion. They were picky buggers. She wanted to look presentable.

After that, it could start anywhere. There would be silence, baby Joseph’s satisfied shouting, then the comforting familiarity of human speech. Sarah would listen, trying to work out whether any new information was being imparted, then drop the thread of it, with the same calm disinterest with which she would discard junk mail. Where she liked them best was in the background, just within earshot; at that distance she got no more nor less than she wanted from them, which was the chattering proof that her day had begun. They were the evidence her senses needed, the walkway-music that smoothed her passage through life. A confirmation of the most basic fact of all, drowned in melody. Sometimes she could hear her own thoughts over the top of them, like the way they fade down a foreign voice on the TV and pipe in an overdubbed translation. Sometimes they were her thoughts, lost on a strange corridor, trying to find a way home. They made her feel spread out, full of light and air: not like when she was in a pit of depression and Berwick’s chintzy mundanity was pressing in on her with geological force. They were the twitch of risk and menace at the core of her, the dangerous spark that could make the whole thing go up in flames. She needed to keep an eye on them. If she knew where they were, she could keep a safe distance. If she stumbled over them in her ignorance, she might never get away alive.

(From A Door Held Open; image by Insung Yoon on Unsplash.)

Charles is editing Others, an anthology celebrating how writers and writing can help us to see the world from other points of view. Read updates from our contributors (including the rest of the Twelve Days of Others sequence) here. Please pledge your support now, and help us to raise funds against hatred.