Twelve Days of Others #10: 'Awakenings' by Tiffany Murray 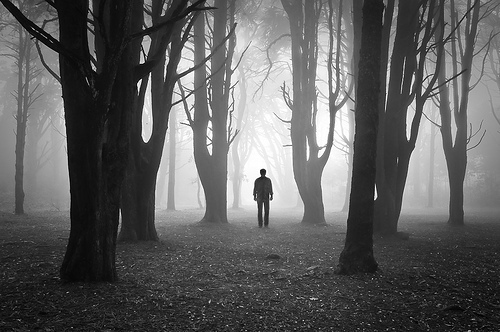 All was grey, as grey as the moth wings that filled his mouth. That was until the child spoke to him, until that Sugar child had him appear.

After all his years, decades, almost two centuries of wandering, this time he thought he had simply stopped, disappeared, and that was an end to it. But the child had come and he’d had no choice. He knew it would be such a long and hard battle because he had fought it before. He knew he had to remember.

He didn’t know what he was, not yet.

Was he born here?

He knew he had died here: for now that was enough.

In truth, he wanted to lie down, to stop and let the memories fall away like clothes in a fire. He would prefer that, to be nothing; but the child had called and now he was walking through this wood: his wood.

As he walked, nettles tickling his legs, birds stopped their song.

Squirrels spat and retreated to their holes.

The boy began to spit, too – he stopped beneath an oak, touched the rough bark and the old life thumped a fierce thump, up from the great gods of the earth – as he spat out his moths and his cobwebs, as he spat out centuries, or two at least. He spat out horsehair, twigs and bitter almonds, rat poison, cowrie shells and Indian ink. He spat and he spat until his voice came. The boy hummed first. Words were too many, too much, so the boy hummed and he walked, bluebells turning to dry crunch at his steps.

He had once hidden in this wood. That was so much time ago – because he had forgotten the trinkets that are days, months, and years.

Now he was the wood.

This boy had seen the oaks fall for Navy ships, he had seen rats crawl up from the wood floor and eat a sleeping man. He had watched a child disappear into the fern and shimmer into nothing. He had seen cats’ eyes dance in the needle tips of the firs. He had seen a girl bury a living, wailing thing at the foot of a stream and he had watched a weeping willow grow there. He had heard bombs tick-tock in bottomless quarries and plump babies cry from rooks’ nests. He had seen men fight with hands, with swords, with knives, with poison, with guns and with paper. This boy had seen men kiss women and men kiss men; he had seen women kiss men and women kiss women. This boy had crawled inside an acorn; he had made men dance until their legs cracked. Once, too long ago, when he was proper flesh and proper bone, when he had hidden and whimpered in the wet hollow of an ancient oak, he had seen a silver deer with the pinkest eyes dance on its hind legs.

This boy had seen men dig a grave for his mother while she still lived. He had seen her tied to an ancient yew and whipped and cut in the red garden. This boy had seen himself swinging from a rope coiled on an oak branch, his own neck snapped.

This boy had watched these woods for all of his time.

The smell of wild garlic tickled him and he walked on.

(From Sugar Hall by Tiffany Murray, published by Seren Books, 2014. Image from Favim.com.)

Tiffany will be contributing a new piece to Others, an anthology celebrating how writers and writing can help us to see the world from other points of view. Read more from our contributors (including the rest of the Twelve Days of Others sequence) here. Please pledge your support now, and help us to raise funds against hatred.