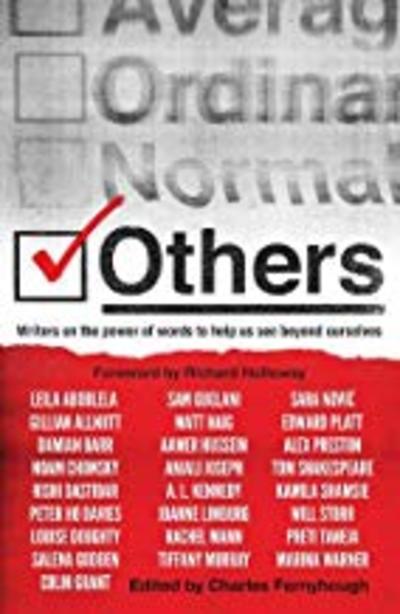 Campaigns | Fiction
You made Others a reality. It's available in all good book stores now.
$8
146 pledges

A copy of the eBook
Buy now

First edition hardback and your name in the back of the book. [Only 50 available]
$40  + shipping
255 pledges

Signed first edition hardback, eBook edition and your name in the back of the book.
$60  + shipping
21 pledges

Two first edition hardbacks, eBook edition, and both your names in the back of the book.
$120  + shipping
7 pledges

An A3 coloured print of the book cover artwork, signed by some of the contributors. Plus a signed first edition hardback, eBook and your name in the back of the book.
$150  + shipping
2 pledges

A signed and dedicated copy of each of Charles’ books (including hardback first editions of A Box of Birds and The Voices Within), plus signed first edition hardback, ebook edition and your name in the back of the book.
$165  + shipping
4 pledges

5x copies of the first edition hardback, eBook and your name in the back of the book.
$225  + shipping
3 pledges

2x tickets to a special reading event with a selection of the contributors and other distinguished guests. [date TBC; travel not included]
$750  + shipping

Charles will provide a full report on your manuscript (up to 80,000 words) fiction or non-fiction plus signed first edition hardback, ebook edition and your name in the back of the book
Numbers limited
$750  + shipping

A talk on any aspect of Charles’ writings (for example, memory or inner voices), anywhere in the UK, plus two tickets to the launch party, signed first edition hardback, ebook edition and your name in the back of the book. Travel expenses not included.
$1,500  + shipping
1 pledge

Your name printed in the front of the book thanking you for your contribution, two tickets to the reading event, plus a signed 1st edition hardback and the eBook. [Only 3 available]
$15,000  + shipping

A special full page dedication to you/your organisation printed in the front of every edition of the book, plus 2 tickets to the reading event and 20 copies of the signed 1st edition hardback. [Only 1 available]

Across the world, intolerance of otherness is growing: in Donald Trump’s America, in Brexit Britain and in a Europe seared by nationalistic resentment. Prejudice and hatred thrive in minds unwilling to entertain other points of view.

The craft of writing arguably depends on representing the experience of others. Poets and novelists make an art of giving voice to the voiceless, and of putting consciousness in places where we didn’t expect to find it. On literature’s springboard, we can all know the exhilarating leap into another worldview.

Others celebrates how words can take us out of the selves we inhabit and show us the world as others see it. Fiction writers and poets will make us look out through other pairs of eyes; essayists will probe the mental blocks that can make it hard to see the realities beyond the media bubbles. The contributors to Others will do nothing they don’t already do – make the homely strange and the exotic familiar – but they’ll do it with an unflinching eye on today’s social inequalities and the thirst for political change.

What can you expect from the book? Sometimes the theme will be the brutal consequences of intolerance and hatred, as in one shattering story of a racist hate crime. Other pieces will explore the quieter forms of otherness that go with deafness, disability, and mental distress. Our failure to stand in other pairs of shoes is most catastrophic when it goes with imbalances of power. But great writing can also illuminate ordinary kinds of otherness, by taking us into points of view we might not otherwise have been able to enter: those moments when, thanks to the magic of words, people are less strange to each other, or we glimpse something of the strangeness of our own selves.

It’s common to hear that now, of all times, literature matters. We hear less about why it matters, how books and reading can relieve minds that have come to despair at the world. Others will be much more than a worthy call for empathy. The greatest literature challenges us to recognise our own otherness; not just to understand how people out there are different to us, but how we are alien to them.

Others may not change the world, although it will be shaped by passions that could. At the very least, it might serve as a pocket device for keeping track of our humanity through what could be some rough years. Net profits from the book will be donated to the charities Refugee Action and Stop Hate UK.

To find out more about what the book will include, please check out the Updates tab.