What is the Greatest Carpe Diem Poem of Them All? Try The Rubaiyat of Omar Khayyam 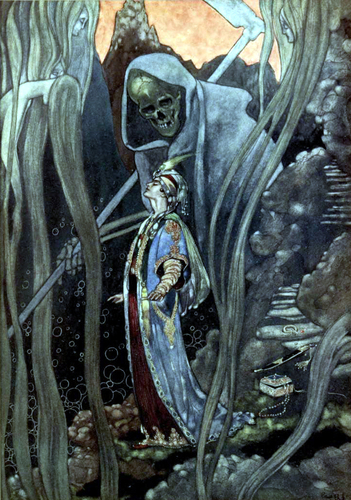 Hello to you all. I hope you managed to seize plenty of days over the summer. For my part, I've been seizing a new title for the book. After much debate and soul-searching, it will now be called Carpe Diem Regained: The Vanishing Art of Seizing the Day, rather than the original title used for the crowdfunding campaign, Carpe Diem Reclaimed: The Story of a Cultural Hijack. Fingers crossed that you like the new title. I certainly do - more poetic in my view, and closer to the real message of the book.

Speaking of poetry, I've decided to add a sneaky little appendix that contains not only top films and songs on the theme of carpe diem, but a selection of the greatest poetry too. Just to give you a sneak preview, one of them is that almost-forgotten classic, The Rubáiyát of Omar Khayyam.

For those who don't know it, the Rubáiyát is a long poem by the eccentric English scholar Edward FitzGerald, based on his loose translation of verses by the eleventh-century Persian poet and mathematician ʽUmar Khayyām.

The initial publication of the Rubáiyát in 1859 – the same year as Darwin’s On The Origin of Species – went completely unnoticed: it didn’t sell a single copy in its first two years. But by chance a remaindered copy of FitzGerald’s twenty-page booklet was picked up for a penny by the Celtic scholar Whitley Stokes, who passed it on to Dante Gabriel Rosetti, who subsequently fell in love with it and sang its praises to his Pre-Raphaelite circle. In 1863 John Ruskin declared, ‘I never did – till this day – read anything so glorious’, and from there began a cult of Omar Khayyam that lasted at least until World War One, by which time there were 447 editions of Fitzgerald’s translation in circulation.

The poem was memorised, quoted and worshipped by a whole generation. Omár Khayyam dining clubs sprang up, and you could even buy Omar tooth powder and playing cards. During the war, dead soldiers were found in the trenches with battered copies in their pockets.

What was the attraction of the Rubáiyát? The answer lies in some of its most famous verses:

Ah, make the most of what we yet may spend,

Before we too into the Dust descend;

Dust into Dust, and under Dust to lie

Then to the lip of this poor earthen Urn

I lean’d, the Secret of my Life to learn:

And Lip to Lip it murmur’d – “While you live

Drink! – for, once dead, you never shall return.”

Oh, threats of Hell and Hopes of Paradise!

One thing at least is certain – This Life flies;

One thing is certain and the rest is Lies;

The Flower that once has blown for ever dies.

The carpe diem calling of the Rubáiyát was unmistakable. It's no wonder that the writer G. K. Chesterton declared the poem to be the bible of the 'carpe diem religion'.

The Rubáiyát may or may not do it for you. So I'm intrigued to know of your own favourite poem or poems that evoke the spirit of seizing the day. Please tell me about them in the comments section below - I'd love to hear from you.

I would also appreciate another favour. Many people think that once an Unbound book has reached 100% then you can no longer pledge support to it. Wrong! It is still possible to make a pledge and get your name printed in the back. So it would be great if you could share the link with a few family and friends, and encourage them to join the merry band of 450 supporters: https://unbound.com/books/carpe-diem-reclaimed

Thanks and best wishes

You may write me down in history
With your bitter, twisted lies,
You may tread me in the very dirt
But still, like dust, I'll rise.

Does my sassiness upset you?
Why are you beset with gloom?
'Cause I walk like I've got oil wells
Pumping in my living room.

Did you want to see me broken?
Bowed head and lowered eyes?
Shoulders falling down like teardrops.
Weakened by my soulful cries.

Does my haughtiness offend you?
Don't you take it awful hard
'Cause I laugh like I've got gold mines
Diggin' in my own back yard.

Does my sexiness upset you?
Does it come as a surprise
That I dance like I've got diamonds
At the meeting of my thighs?

Out of the huts of history's shame
I rise
Up from a past that's rooted in pain
I rise
I'm a black ocean, leaping and wide,
Welling and swelling I bear in the tide.
Leaving behind nights of terror and fear
I rise
Into a daybreak that's wondrously clear
I rise
Bringing the gifts that my ancestors gave,
I am the dream and the hope of the slave.
I rise
I rise
I rise.

Hello Linda Sarah. The great Maya Angelou - what a fabulous poem! You'll be pleased to hear that Maya Angelou gets a whole section to herself in the book, where I explore her personal philosophy of seizing the day, and the struggles she had trying to live up to it while endeavouring to survive as a single mother. Best wishes, Roman

Well, if I think Carpe Diem, I have a strong association with Ronsard. Here it is in French, Sonnets pour Hélène, with a translation which is not perfect but gives a sense of what it is all about. Love the new title by the way!

When you are very old, at evening, by the fire,
spinning wool by candlelight and winding it in skeins,
you will say in wonderment as you recite my lines:
“Ronsard admired me in the days when I was fair.”

Then not one of your servants dozing gently there
hearing my name’s cadence break through your low repines
but will start into wakefulness out of her dreams
and bless your name — immortalised by my desire.

I’ll be underneath the ground, and a boneless shade
taking my long rest in the scented myrtle-glade,
and you’ll be an old woman, nodding towards life’s close,