The Most Frightening Graph You'll See This Year 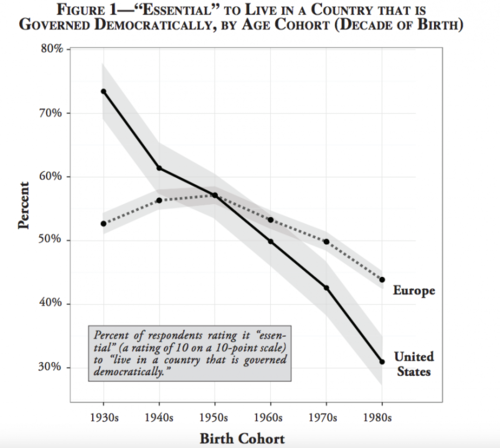 Years before embarking on a career writing what might be broadly called ‘popular philosophy’ books, I had another career as a political scientist. I still enjoy flicking through the academic journals in my old field now and then. When doing so recently I came across what ranks as one of the most startling – indeed frightening – graphs I’ve seen in years. It appears in the July 2016 issue of the respected Journal of Democracy.

The graph (see above) shows that around 75% of today’s US citizens who were born in the 1930s believe it is essential to live in a democracy, whereas for those born in the 1980s the figure plummets to around 30%. This generational decline is evident in Europe too, although it’s not quite as steep.

Pretty scary, huh? It looks like democratic values are distinctly out of fashion with millennials.

It fits a trend, of course: the growing disillusion with democracy-as-we-know-it is evident in the rise of anti-system, far-right politicians like Trump and Le Pen, as well as the declining trust in government and traditional political parties.

Unfortuantely I hadn't seen this graph when I wrote Carpe Diem Regained, otherwise it would be in there. But to make up for it, I've included it in a new little micro essay launched today called CAN ANCIENT PHILOSOPHY SAVE DEMOCRACY?. It explores how a wave of collective carpe diem activism might help rescue democracy from its impending failure. Do seize the mouse and spend a couple of minutes checking it out. 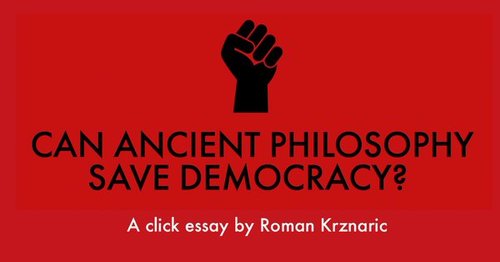