Epiphany on the Stairs 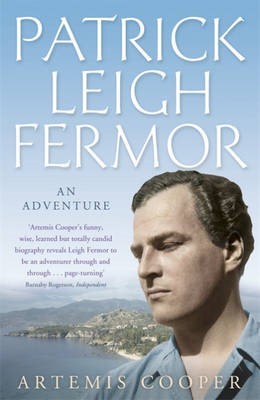 It’s just four days into the crowdfunding for Carpe Diem Reclaimed and more than a quarter of the total has already been raised – thank you everyone for seizing the day and giving such fantastic support!

Many people have asked me what inspired me to write a book about carpe diem. Usually it’s difficult to pinpoint an exact moment that the idea for a book is born. But for this one, the origin is clear: I had an epiphany on the stairs.

It was around three years ago, and I was walking up the staircase of my home in Oxford, excitedly clutching the new biography of the travel writer Patrick Leigh Fermor. I was itching to immerse myself in his spirited, adventurous life, and especially eager to find out about the famous journey of his youth. Just before his nineteenth birthday, in December 1933, he suddenly decided to abandon pursuing a conventional career in London and instead embark on an audacious expedition: to walk across Europe from the Hook of Holland to Constantinople.

Off he went with little more than a sleeping bag and a volume of Horace’s Odes to live out his romantic dream of being a medieval wandering scholar, on a life-changing, eighteen-month trek that took him through Nazi Germany, across the Marches of Transylvania and finally into Turkey. From the moment he set out, he felt an intoxicating sense of freedom. ‘Living in a yeasty ferment of excitement I grudged every second of sleep,’ he wrote. I wanted a taste of that exuberant freedom in my mouth.

Half way up to my attic study, where I was about to recline in my rocking chair and lose myself in the pages of Fermor’s story, I was stopped still by a cascade of questions that unexpectedly filled my mind. Why was I so keen to read about his passionate, intense, seize-the-day life, rather than actually live such a life for myself? In fact, why was I so obsessed with reading about people who had taken similarly adventurous paths and broken the social mold, from the radical eighteenth-century thinker Mary Wollstonecraft to the high-wire artist Philippe Petit who had traversed the Twin Towers? Why – as my partner playfully pointed out – whenever I became interested in something new, like folk singing, learning to dance, or even having children, did I almost always want to read a book about it before (or instead of) doing it in reality?

These questions crystallised into an almost guilty epiphany: that my life was full of vicarious, second-hand experiences and pleasures. A proxy life, filtered through words on a page, as well as the screen I stared at for hours each day, which mediated my encounters with the world. Of course reading – my great obsession – was valuable for a thousand reasons, from the way it expanded my imagination to its offers of consolation, but why was I so intent on reading my way to my grave at the cost of direct experience? Although I admired the carpe diem mentality of people like Fermor, I struggled to practise it myself, even though I knew – or at least suspected – it would make my life richer, more meaningful, more worth living.

That was the moment when I decided to write this book. I wanted to understand what carpe diem really means, and why most of us find it so difficult to do. I wanted to know how to channel its power to transform our personal lives and the world we live in, and whether it is always good for us. Might it sometimes be reckless, dangerous or even immoral? I wanted to get beyond the glib self-help manuals which sell seizing the day as a simplistic formula for eternal happiness and discover its lost history, its psychological foundations, its scientific subtleties and political possibilities, its place in the human story.

Of course, the irony hasn’t escaped me that I have opted to satisfy my curiosity about carpe diem – a subject that more than most should inspire practical action – by writing a book on it. That’s not something I can easily help: I’m a writer. And I’ve decided to crowdfund the book so I can put my ideas on the line and seek out those who, like me, believe it’s time to reclaim carpe diem.