A Writer's Whiteboard at Work 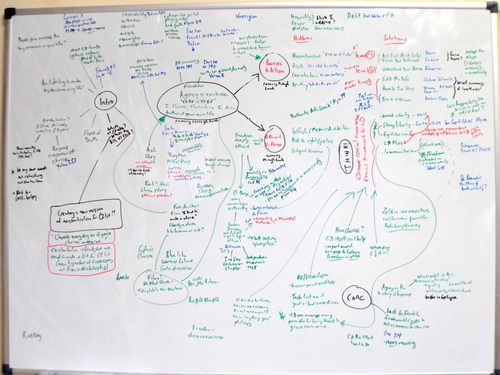 Now that Carpe Diem Reclaimed is fully funded, I'd like to send you some occasional updates as we progress towards publication of the book.

The photo you can see is a snapshot of one of the whiteboards in my study in Oxford, where I plan out each chapter. This image shows the thinking behind the final chapter, which I've recently completed writing. As you can see it's not exactly linear - no simple flowcharts or straightforward narratives! It's been the hardest chapter to write, which you can probablly tell from the web of text and arrows flying around the place.

The chapter is called 'I Choose, Therefore I Am' and is an attempt to sum up the whole thesis of Carpe Diem Reclaimed. It's the most philosophical part of the book, drawing particularly on existentialist thought (especially the dynamic duo of Jean-Paul Sartre and Simone de Beauvoir). One of the issues it grapples with is ethics. Here is the major charge made against carpe diem: it's a philosophy of life that asserts the value of freedom while failing to place sufficient moral boundaries on it - for what is to stop a rapacious financier or a racist thug taking carpe diem as their motto? That's the tricky question I've been tackling.

In my research for the chapter I came across a quote from the Swiss sculptor Alberto Giacometti (a great friend of Sartre's, who thought his elongated human forms were an expression of existentialism):

'All the sculptures of today, like those of the past, will end one day in pieces...So it is important to fashion one's work carefully in its smallest recesses and charge every particle of matter with life.'

Isn't that wonderful? I think it captures the spirit of carpe diem perfectly.

In other news, I've started fulfilling the Pledges! Four people have signed up to be Editorial Advisors, and I have now begun the process of getting their comments on the text. I'm really looking forward to their feedback, and if anyone else fancies upgrading their pledge to become an Editorial Advisor, please email Georgia Odd at Unbound (georgia@unbound.co.uk) and she'll sort it out for you. It would be fantastic to get your input.

PS Do let your friends know that it's not too late to pledge support for the book and receive in return a beautiful copy with their name printed in the back.

Looking forward to receiving my copy, but in meantime I'm liking the idea of a writing whiteboard

Thanks for those thoughts John-Paul and Wendy. I've actually got two whiteboards in my study, and they have become trusted companions over the past year. I spend hours sitting in my rocking chair contemplating them, tinkering with them, scrubbing them out, and occasionally talking to them! I hugely recommend them as a tool for visual thinking.

On my desk I also keep a handy box of cards called 'Oblique Strategies', designed by Brain Eno and Peter Schmidt. They offer random thought prompts for when you're stuck e.g. 'Discard an axiom', 'What would your closest friend do?' and 'Repetition is a form of change'.