Thank you to all subscribers who have waited patiently (and why not also to those who have waited impatiently) for this project to reach the target of 100% Funded.  It has been reached.  All at Shandy Hall are delighted and we wait to hear what is the next step. 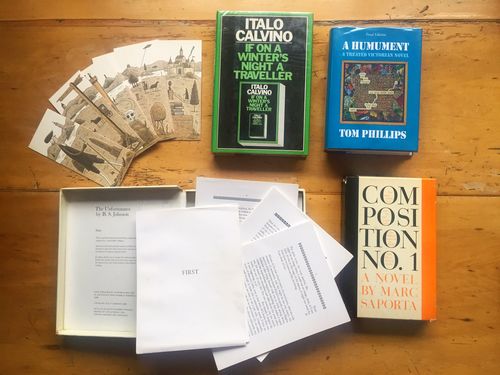 Examples of books from Shandy Hall that blur the boundaries

Myriorama for Shandy Hall by Tom Gauld. Twelve pictorial cards that can placed next to each other, in any order, to produce 479,001,600 different stories (2016); If on a Winter’s Night a Traveller by Italo Calvino pub. Secker and Warburg (1981); A Humument by Tom Phillips (Final Edition) pub. Thames and Hudson (2016); The Unfortunates by B S Johnson pub. Panther Books (1969); Composition No.1 by Marc Saporta pub. Simon and Schuster (1963).

Books that play around with the form of a story are especially welcome at Shandy Hall. Laurence Sterne’s Tristram Shandy was originally published in 1759 in two volumes. The reader was told there would be more in the days to come and the book was ‘completed’ in 1767 with the ninth volume. Sterne died soon after. What he left behind was one of the most extraordinary books of fiction ever created. The book contains pages that are black, pages that are blank, chapters that are missing, pages that are marbled and an admission that the book is a ‘cock and bull story’ ie a load of tosh. The book is very funny (one reason why it has never been out of print since it was first published) and it is also a work of genius.

Since those late 18th century days in Georgian England there have been millions of books published and many of those books are novels. Novels start with a ‘beginning’, move through a ‘middle’ and come to an ‘end’. That’s what the rules say should happen. Sterne broke those rules in 1759 and his legacy is that many continue to follow his example and experiment with how to tell a story. How to play around with different forms and approaches that reflect life and all its possibilities. We have lots of experimental books here at Shandy Hall and I thought you might like to see two or three.

In the photograph above there are four. The first isn’t strictly a book as it is a myriorama which comprises 12 cards that can be placed next to each other in any order and thereby telling a different story each time they are laid out. No words, just pictures. Drawn by cartoonist Tom Gauld they are a delight.

The Italo Calvino novel, If on a Winter’s Night a Traveller, is an important member of the experimental novel section in our library. Calvino had the idea of writing a novel composed only of beginnings of novels. The protagonist would be a Reader who is continually interrupted. The Reader buys the new novel A by the author Z. But it is a defective copy, he cannot go beyond the beginning. . .  He returns to the bookstore to have the volume exchanged . . . but as the Reader continually tries to obtain a correct copy of the book that he wants to read, each time he encounters a problem.

A Humument by Tom Phillips presents itself in many guises.  There are a total of six editions of this glorious example of BookArt – all of which are different from each other.  Phillips takes an original novel (A Human Document by W H Mallock) and paints away the existing words on each page to leave selected and chosen words behind.  A new story is created from an erased version of an old one. As the variations of each page are limitless so the book is complete in its non-completedness.

B S Johnson made a strong statement with the publication of The Unfortunates in 1969. Here (like Cain’s Jawbone) we have a book in a box. The pages are placed in a box, in random order, and the reader is encouraged to read them in the order that is accidental.  All fit to form a story that is not constrained by ‘beginning middle and end’.  Johnson said ‘It is no part of my intention to provide a continuous narrative… My purpose is to reflect with humility the reality of the chaos of what life certainly seems to be like’

Marc Saporta had already made his own statement a few years earlier with Composition No 1. Once again single sheets of pages are placed in a box and the reader follows the story in any way she chooses. This book is available as an app – and a successful version it is too.

When Torquemada’s Puzzle Book found its way to Shandy Hall in 2017 it came as a complete surprise. Published in 1934 it contains puzzles and word-play, anagrams and acrostics and all sorts of mind-challenging problems and puzzles. But it is the last 100 pages of that puzzle book that catch the attention. A novel, a murder-mystery, entitled Cain’s Jawbone where the author, Edward Powys Mathers (Torquemada) claimed that the publisher had bound the pages of his fiendish escapade in the wrong order.  Nothing could now be done to rectify the circumstances so it was up to the reader to sort the pages into the correct order and then deduce who were the assassins and who were the assassinated. Easier said than done.  Only two correct answers were submitted. Can that be beaten? We will make it easier to construct the narrative by printing the pages separately so they can be placed next to each other easily.

Do we have anymore updates on this book? When roughly are we likely to receive it?

Please send us an update, an estimated date would be nice. Thanks!

Ok, We are being wonderfully patient but at this point, the last email update I found was from April. Any updates? Are we out the money? What's going on? Hard to plan for this as a present if we have no ideas on when it will be delivered. Thank you.

Hi everyone - We're working behind the scenes to make the box set and we have this scheduled for publication in September 2019. We'll aiming to have finished boxes ready to send out to supporters before this. Thanks for your patience! Unbound Support.