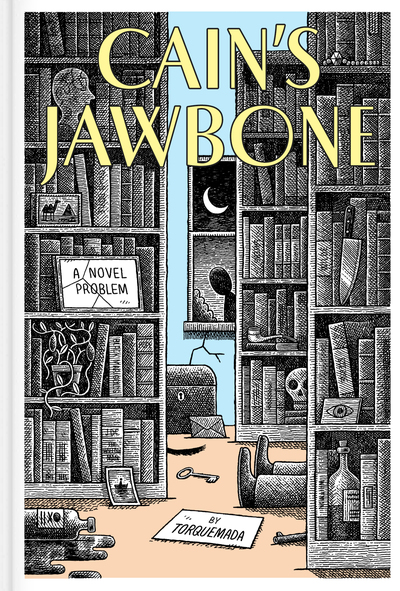 Fiction | Crime
Rewards for this book are not available.

2 x The 100 pages of Cain's Jawbone unbound in two boxes, (shipped to the same address) so you can compete with a friend.
$150  + shipping
2 pledges

Your place on a guided tour of Shandy Hall, plus the 100 pages of Cain's Jawbone unbound in a box and your name in the supporters section.

In 1934, The Observer’s crossword writer, Edward Powys Mathers, wrote a unique novel Cain’s Jawbone. The title, referring to the first recorded murder weapon, was written under his pen name Torquemada. The story was not only a murder mystery but one of the hardest and most beguiling word puzzles ever published.

The 100 pages of the book were printed and bound out of order and the reader was invited to re-order the pages, solve the mysteries and reveal the murderer(s). There were over 32 million possible combinations of pages but only one order was correct. The puzzle was extremely difficult and was only solved by two puzzlers whose names were revealed in The Observer - but the solution to the problem remained a secret.

The Laurence Sterne Trust is interested in all literary works that challenge the idea of linear narrative (BS Johnson, Marc Saporta, Julio Cortázar &c) in line with Laurence Sterne’s legacy, so the Trust responded with a mixture of surprise and delight when The Torquemada Puzzle Book was donated to the museum’s contemporary collection, even though the solution was missing. Now, after many months of research and good fortune, the Trust has managed to unlock the secret of Cain’s Jawbone.

To share the complexities, red-herrings and literary adventures hidden in the puzzle, Unbound have re-published the book so that readers can reorder the pages for themselves and then get down to identifying the characters behind the fiendish crimes.

The author’s nom de plume was Torquemada, a name linked to the Spanish Inquisition, for Edward Powys Mathers (known to his friends as Bill) believed that puzzles should be mind-bendingly difficult but equally rewarding when the solution was found. He introduced the cryptic crossword to this country in 1924 through the pages of The Observer newspaper. The British love a puzzle and grow very attached to crossword compilers, always looking forward to next week’s puzzle, and Torquemada had many loyal supporters. John Dickson Carr (US author of The Hollow Man, voted the finest ‘locked-room’ murder mystery of all time) was a friend. He believed that ‘ there has never lived a man with such a wide knowledge of sensational fiction. Torquemada of The Observer read everything that was being written … and was already familiar with everything that had been written. And he never forgot any of it.’

Powys Mathers was acknowledged as a brilliant translator in the early 1920s and was responsible for an edition ofThe Thousand Nights and One Night, more commonly known as The Arabian Nights; Black Marigolds (a favourite of our present Poet Laureate, Carol Ann Duffy) and other ‘Eastern’ texts; as well as detective stories. He was also a critic specialising in reviewing crime fiction.

In 1934 he published a selection of his puzzles under the title The Torquemada Puzzle Book. As well as some gloriously difficult crosswords, the book contained spooneristics, verbal games, telacrostics, triple cricket acrostics and anagrams - enough to keep a family occupied for weeks.

The final 100 pages of the book contained the novel-cum-puzzle Cain’s Jawbone.

‘Cain’s Jawbone’, the bald narrative of a series of tragic happenings during a period of less than six months in a recent year, has met with an accident which seems to be unique in the history of the novelette. The pages have been printed in an entirely haphazard and incorrect order, a fact which reflects little credit on somebody. The author assures his readers, however, that while it is now too late for him to remedy the ordering of the pages, it is quite possible for them, should they care to take the trouble, to re-order them correctly for themselves. Before they attempt to do this, they may care to be assured that there is an inevitable order, the one in which the pages were written, and that, while the narrator’s mind may flit occasionally backwards and forwards in the modern manner, the narrative marches on, relentlessly and unequivocally, from the first page to the last.

A space for notes is provided at the bottom of each page.

In 1934 a prize of £15 was offered to the first reader who could re-order the pages and provide an account of the 6 persons murdered in Cain’s Jawbone and the full names of their murderers.

Please Note: This is not a competition for the faint-hearted. The puzzle is phenomenally difficult.

Unlike the famous puzzle book Masquerade by Kit Williams, it is not as likely to be solved by a bright child of ten with an understanding of language, simple mathematics and astronomy as it is to be found by an Oxford don.

To coincide with the re-issuing of Cain’s Jawbone, Unbound are also reviving the competition. The prize of £1,000 (roughly how much £15 was worth in 1934) will be given to the first reader to provide the names of the murderers and the murdered, the correct order of the pages and a short explanation of how the solution was obtained. The competition will run for one year from the date of publication.

Acknowledgments: Geoffrey Day, John Price, Ian Simpson, Christian Bök, Craig Dworkin. Thanks to Brian Dettmer for the use of his treated ‘Tristram Shandy’ used as the banner image.

2 x The 100 pages of Cain's Jawbone unbound in two boxes, (shipped to the same address) so you can compete with a friend.
View all 3 rewards