The press as a despotic monarchy 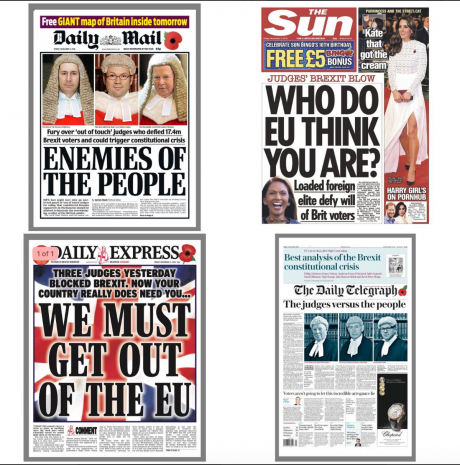 openDemocracy asked me to respond to the High Court judgement that Parliament not the government must authorise triggering Article 50 to take the UK out of the EU. Here is what I wrote. It sure is making writing the book interesting! It also makes it easier for me to argue that Brexit poses fundamental constitutional questions. If you enjoy it please forward to anyone you think would also like to pre-subscribe. Thanks, Anthony.

The government of Theresa May has made such bad calls as on Heathrow and Hinkley Point it is hard to believe it will survive long enough to suffer their consequences. Now it has made another appalling mistake but this time one it will surely rue. It has decided to appeal the High Court’s ruling that it cannot activate Article 50 without the backing of parliament.

You can see why May’s team took the initial decision to claim that they could activate Article 50 - the formal mechanism that starts a country's exit from the EU - at a time of their chosing, using the Crown Prerogative. They claimed this power based on the legitimacy of the referendum’s outcome and the fact that international treaties are a prerogative of the executive and not a matter for parliament. Behind this firmness of purpose was the need to display strength given their weakness. They did not know what sort of Brexit they wanted, what the consequences of different options might be, how to hold together the differences within their own party, or how the EU might respond. To add to this the uncertainty of saying they wanted MPs and peers to chuck in their views, demand answers to questions they did not want asked, and have the chance for wrecking or even delaying amendments, would make it look as if the Prime Minister was not committed.

Their decision reinforced Brexit’s toxic consequences for the constitution. This is not an argument against holding referendums, it should be said immediately. They have to be used honestly not arbitrarily. The point is hardly original, as I set out in 2010,

The device of a referendum is itself, as Stuart Weir has written, an awesome machine that should be handled with respect. Referendums need rules and a context and they need to be preceded by a well-founded debate. That leads to democracy. Otherwise they become populist tools in the hands of manipulative neo-dictators

The Brexiteers made the referendum a campaign to ‘take back’ our democracy and re-establish the sovereignty of parliament. But in winning it and overturning the government and the views of a majority of MPs they have undermined the sovereignty of parliament! The minister for Brexit David Davis responding to the decision yesterday saying, “parliament is sovereign, has been sovereign, but of course the people are sovereign”. You do not need to read this twice to see that the UK's constitution has ceased to rest on solid foundations.

The High Court attempted a rescue operation by stating in their unanimous judgment the most unequivocal terms of the theory of the absolute sovereignty of parliament, summoning Sir Edward Coke from the depths of 1610 as well as Dicey himself to their side. I think they overstated the case, but that is not the point. The core of their conclusion is that the executive cannot decide domestic law by prerogative decree and cannot take away rights that parliament has established by law. As the treaty to join the EU entailed the passing of the European Community Act of 1972, and as this did reconfigure domestic law and alter the rights of Her Majesty’s subjects, only explicit parliamentary authority can undo this.

The judgement is so straightforward that May should have accepted it, not appealed against it. Having clearly made the point about her own determination, she should have had drafted a Bill giving the government the power to activate Article 50 in the best interests of the people and challenged MPs and peers to vote it down. If they did it would precipitate an election. (One she would, alas, almost certainly win.) Instead, she has taken the route of pursuing control not risking democracy.

The Brexit press has launched an immediate, unprecedented and fantastic personal assault on the three High Court judges as “Enemies of the people”, no less from the Daily Mail, across the whole of its front page, with “The Judges versus the People”, proclaimed by the Telegraph across its. If this approached is sustained it marks a historic shift in British politics. The political-media caste and its manipulative populism now claims complete sovereignty above and beyond the law and parliament on the basis of a plebiscite. I have described how Theresa May's premiership is in effect The Daily Mail taking power. Now its authority has been moderated, quite reasonably, by the High Court. The response has been to treat this as an act of treason and in effect lèse-majesté. This is the route to a new form of dictatorship: the co-dictatorship of the media and the executive against MPs and, in effect, civil society itself (in this case the judges) as soon as it demonstrates the capacity for any effective independence.

In effect, the Brexit press seeks to intimidate the Supreme Court, to which the case will now go to appeal. With apparent Brexiteers like Lord Sumption among its 11 members, who will want to support the government if they can, they have turned the Supreme Court decision into an open battle for power. This in itself is another twist in the decomposition of the old order.

There is an ironic aspect to the whole process that may turn the appeal into a nightmare for May and company.

In its judgement the High Court had to set out the nature of Article 50. Those who took the case to the court said that the Article is irrevocable, meaning that once it has been activated the UK has to leave the EU and the process cannot be abandoned. The government, feeling it had to demonstrate its strength, agreed. The High Court simply notes that this interpretation is “common ground”.

But John Kerr, who apparently drafted Article 50, has now said that it could be abandoned and is not irrevocable. Article 50 is about an EU member state declaring it will leave the EU and having a 2 year process to negotiate how this is done before it happens. But if the member state, say, experiences a change of government in the two year period and then says, whoops, change of mind, and withdraws its withdrawal, it cannot then be forced to leave – in Kerr’s view.

Now if the government had taken this view and argued that invoking article 50 was not irrevocable it would have created uncertainty where it wants to show control. That was the political reason for its interpretation. Had it said, however, that Article 50 is conditional on being completed over a two-year period, it would have left time for parliament to endorse the outcome (or not). In which case yesterday’s High Court judgment could have been, some say probably would have been, that the government could trigger Article 50 without the agreement of parliament. Baffled? If triggering Article 50 is irrevocable, then triggering means the UK must then leave the EU, which means it will overturn domestic law passed by parliament. This, the judges ruled had to have parliament’s consent. But if invoking Article 50 is not irrevocable, then provided parliament is given its say in the course of the two years, surely the executive can start the process without prior agreement of MPs and peers.

The government could now seek to change its mind on this point to enure its unilateral right to invoke Article 50. But if it does so it will raise a cardinal point of EU law. The UK Supreme Court is not in a position to decide this. Instead, it will have to - wait for it - go to to the European Court of Justice, to decide. The very court that Theresa May says must now cease to rule on our laws!

Indeed, even if the government does not change its mind the Supreme Court might itself decide it has to clarify the matter and ask the ECJ for a ruling. How many weeks or months will this take? The attraction for the Supreme Court is that it offers them a judgment of Solomon, telling the government that it can press the Article 50 button but that parliament must at some point be consulted and thus amend or reject the decision.

Indeed this is the point that parliament should seek to establish, that it can approve the terms that the government obtains for Brexit.

What if the Supreme Court bows to the populist pressures of the Brexit press, the Mail in particular, reverses the High Court ruling and gives the executive unilateral power? The judges have invoked Edward Coke. He was the main author of the 1628 Petition of Right drawn up against the King’s arbitrary abuses of power. We will need to create a new petition - and the political force to go with it - to defend our rights against today’s arbitrary monarch, the media-monarchy. Farage has declared that UKIP is going to march on the Supreme Court. The settlement of 1688 may not survive this anyway and I will argue should be replaced. The only way to secure democracy is with our own codified constitution, ironically in or out of the EU this will make ours a European country.

Parliament itself should be shouting for its say in the process, and it doesn't say much for its self-respect that most MPs - whatever their views on the EU - have not challenged Mrs May's power grab.