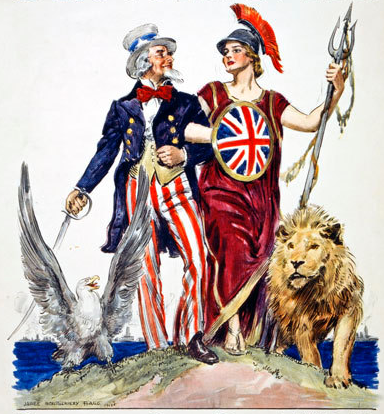 Whoops! A change of plan. The election of Trump was very painful to witness. First because of its likely impact on the fate of our planet, second for the consequences for everyone in the United States, especially non-whites. I had a small, additional sense of loss. A key argument in my book is that Brexit came about thanks to the exceptional history of England, a country without its own voice, where many still want it to be ‘Great Britain’ and find this dream impossible inside the European Union. But if England had been as exceptional as I initially argued, the United States would not have elected Trump on the mandate of making America “great again”.

Clearly there are also similarities between Brexit and Trump's success, in terms of the social and economic nature of their support, as well as the dire weakness of the alternatives on offer with their complicity in the existing system and its corruptions. Not only did I have to rethink my argument, I realised that incorporating a comparison with the defeat of Hilary Clinton helped clarify my analysis of why Brexit trounced the Westminster political class, and even made it more interesting.

With the encouragement and support of John Mitchinson, my Unbound editor, I am therefore reframing the content of what was going to be, WHAT NEXT: Britain after Brexit. And changing the title! The book will be called, THE LURE OF GREATNESS: England’s Brexit and America’s Trump. Now I have to crack on to try and make up for the delay. I hope you will all appreciate what I've done and, when you have it in your hands, approve of the change. Do let me know if you have any ideas or suggestions and thank you for your patience.

Nostalgia for greatness. In America, it's nostalgia for the days of welcome immigration. Jobs and land for all,not-very-different immigrants from Ireland, Sicily, eastern Europe happy to subscribe to a national anti-colonial ideology. Now their grandchildren forgotten, unemployed, angry, besieged by very different immigrants.No sympathy from liberal elites with identify politics. ln Britain, nostalgia for empire, superiority over non-white people, captive markets. Role of 'imperial preference" in Brexiteers' dreams of freedom from European market and fantasies about the Anglo-sphere. In both cases, failure of public education, liberal elites seen as betrahying traditonal patriotism.

I was not surprised by the election result in the US. I felt the media was indeed manipulating the way the campaign was being portrayed, and which hid what was really going on in the complex demographics of the US voting public. This was confirmed by a professional media producer friend who lives in Washington and who has an astute mind and a passionate interest in politics. Clinton did to Sanders what Trump did to Clinton. And Sanders was the only chance the Democrats had of winning the election. But to do that they would have had to really bite the hand that feeds them. With the Republicans, Trump only make it look like he was biting that hand, the hand of the Corporates. In reality, the big end of town all knew Trump will be the most corrupt and deceitful President the US has had since Nixon. And that will only feed the ongoing disillusionment in public politics. The big losers will be the people, and the biggest cost will be the loss of freedom. The big winners will be the military and the the police, but somehow, I got the feeling that whichever candidate won - Clinton or Trump - the winners were always going to be the same, once Sanders had effectively been knocked out. Putting it another way, the only hope the people of America had of getting a President who would actually address the issues Trump appeared to address was Sanders, and once Sanders was knocked out, it didnt matter who won. Perhaps US voters realised this and consequently decided it was better to vote for the absolute worst candidate because they believe in the old myth that things really have to get much worse before they can get better. Lets hope the long suffering planet believes in that myth too.

What does this say about Brexit and the other possible shifts further to the right that might take place in Holland, France, maybe even Germany? That the so-called democratic processes people are increasingly becoming duped by dont work any more. People arent stupid. They can sense they're being had. What people arent capable of doing is identifying and choosing the best way forward for themselves and the rest of humanity. But what's most worrying is to see what the media and politicians, in conjunction with other institutions that seek to exercise and manipulate power over people's lives are doing. What they're doing is making people feel increasingly under threat, insecure and uncertain which is triggering an en mass reversion to "fight-flight" instinctive psychological response mechanism. This renders populations both predictable and most susceptible to manipulation which leads to mass hysterics. This was the mechanism Hitler and Mussolini used to gain control over their respective populations. These terrifying potentialities are again becoming mobilised in great numbers of people today. Brexit and Trump are two different facets of the same phenomena. I'm not sure whether understanding this intellectually is going to shift the game. What is needed is an emotion based discourse, but such discourses are notoriously difficult to conduct intelligently. Could even be a contradiction to themselves, tho I'm not convinced at all that intelligence and emotion are mutually exclusive. Rather, I would say that the way a discourse becomes framed is what determines whether it will maintain a parity between intelligence and emotional conviction. Sadly this parity does not appear to be part of the present volatile mix. I would hate to be my children. They will carry the burden of what is being created for the rest of their lives.

I am not often happy about the use of the term "non-white" which implies somehow that everyone else is somehow not "normally" included.