A Choice of Violence: 12 takes on today's US election

The US election is not about Brexit but Trump has made it a symbol of right-wing, insurrectionary, white-nativist change. I was in the US for family reasons and watched two of the debates there. Mary Fitzgerald, openDemocracy's Editor-in-Chief and a supporter of the book insisted I write something which she published yesterday. I'll draw on the argument in the book too, and so the Unbound editors thought I should share this. Anthony 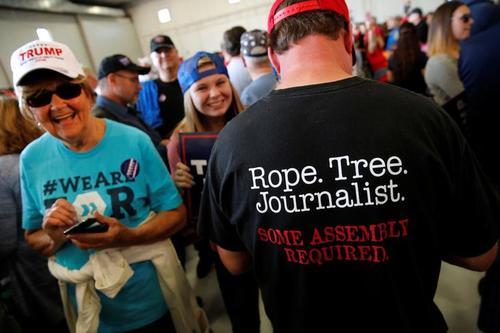 1. There should be a plural term for violences. This would let us talk about how to choose between violences. Today, this would mean judging between different ‘brands’ of violence in the sense of product lines. Calculated, targeted and intimidating violence - the violence of drones, for example, compared to inflammatory, provocative, intimidating violence – the violence of terrorism. Tomorrow the American people will have to choose between two forms of violence. The system, represented by Hillary Clinton, and an anti-system conjured up by Donald Trump.

2. It is essential to be able to distinguish between different kinds of evil and judge them accordingly. Dante’s Inferno had 9 circles that differentiated the punishments of hell befitting the severity of wickedness.

3. As a rule, therefore, never talk about ‘fascism’ or ‘Stalinism’ in political or polemical writing. The terms function to stop thought and end judgment by precluding discrimination. They are used to mobilise an attitude that pre-empts scrutiny. And even interest. If something is fascist we should be able to ask what kind it is and how bad it might be, but the concentration camps make such an approach taboo.

4. For the first time I break the rule. Donald Trump is a fascist. He draws on all the violence of the extreme market place, combines it with the inhumanity of the games-show, and applies it to mobilising para-legal enmity and violence against minorities. It’s not a matter of his personal character; it is what his defects as a human being permit him to encourage, enable and mobilise. There is a famous photomontage by John Heartfield of Hitler making his salute and the large figure of a banker-businessman slipping marks into it. Trump pays himself. Such is his narcissism. This does not make his politics merely personal.

5. It is also a weakness. He is on his own. There are not Trump stormtroopers. He has not created an organised movement. He is the personification of the late capitalist spectacle. He draws a crowd, creates an audience, goads them into exhuberence and as a master of the political branch of the entertainment industry, gets votes. This is a politics of turnout, not organising or creating a machine. It abhors anything to which it might be accountable. Organisationally, everything turns on it capturing the presidential component of state power.

6. Trump draws his support from the energy of the thrill of violation. The American media and marketplace is constantly stimulating people and putting them on edge, yet is remarkably dull and bland. It makes the violation of norms seems authentic and ‘real’. By violating people and processes, speaking the unspeakable, and breaking the will of the conventional, Trump creates a new ‘reality’. Everyone knows it is an old one – lynching. This too is thrilling. Now, in the last weeks, there is even patience to his appeal. He has already made the incitement of undifferentiated violence, the foundation of fascism, his calling card. He can bide his time without more provocations.

7. If he wins it leads to war or dictatorship because these are the only ways to control the expectations and forces such a call unleashes. America won’t tolerate dictatorship so it will lead to war, external against whoever and internal against Latinos and blacks.

8. But violence of a different, less overt kind has already been taking place against Americans of colour and those who are poor. Over 50 million who are eligible are not registered to vote. And over the last decade more than ten million in homes and households where people are registered have lost jobs in manufacturing. In Brexit Britain we are told that many voted to leave the EU because the health service is under pressure, housing is costly when it exists, incomes have flatlined. But in the United States there is no universal health service or equivalent welfare system. It is a brutal country. Its wealth makes this worse. Trump supporters are not the poor whom its crushes as a matter of course. They are those sufficiently well-off to experience the frustration of their expectations and now the fear of being crushed.

9. Hillary Clinton personifies the system-violence of the last thirty years that created this situation. From the industrial incarceration of blacks, the job losses of globalisation without counter-measures, to the Iraq war. Now she agrees invading Iraq was a mistake, but she remains an interventionist and cold warrior, fully engaged with the traditional projection of American power, and of course Wall Street. Those who simply want to remove American politics from the inferno altogether find it hard to distinguish between its circles. This is worse than naive.

10. The great tragedy of this year is that Bernie Sanders could not take on Trump rather than Clinton. Sanders’ challenge to the system being far more coherent than Trump's, he would have both mobilised positive support and appealed to the less bigoted of the showman's enthusiasts. The paucity of Clinton bumper stickers and posters signals how shallow her support is and has been. The debates did little to compensate for this. She played them with consummate professionalism, her strategy was to let Trump destroy himself especially by provoking his contempt for women. As personal duels they had a lurid fascination. As a debate over policy they were tedious. At no point did Clinton really address the problems faced by America, in effect she accepted that she is the candidate for continuity not change when change is badly needed. She did not even make an issue of climate change.

11. The most positive thing is that American macho will be irreversibly wounded – provided Hillary wins. When Obama won 8 years ago there was the hope, which I shared, that this would finally marginalise America's racial hatred not galvanise it. But Obama did not run as a 'black candidate' in the way that Hillary is running as a woman and a feminist. The full equality of women has never been an issue at the heart of US politics, she has put it there.

12. But her promise is nonetheless a continuation of traditional American violence. Barack Obama described his foreign policy as “Don’t do stupid shit”. This is an intelligent approach if you are the dominant world power and being challenged by the rise of others. After all, think of what it does permit you to do. Yet Hillary Clinton attacked it as not “an organizing principle” worthy of “great nations”. On the contrary. Today Obama's miserable imperative is an essential instruction as to how Americans should vote: don't do stupid shit!