Meet Brenda Monk - she's a woman who does stand up 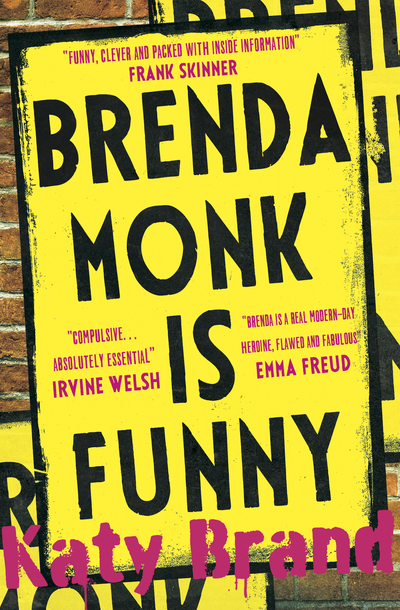 Fiction | Humour
You made Brenda Monk Is Funny a reality. It's available in all good book stores now.
$4
154 pledges

Walk in a comedian’s shoes, solve a supernatural mystery and relive the true story of the Trojan war; there’s something for every fiction lover in this bundle. Featuring hardbacks of Brenda Monk is Funny, Conversations with Spirits and Crushed Mexican Spiders.
$75  + shipping
30 pledges

Be in the book!

Brenda Monk is a character I have wanted to write for a long time. Since joining the world of professional comedy in 2004, and with all my experiences before that as an avid viewer of anything purporting to be funny, and then a student in sketch shows and comic plays living high on the hog on credit cards and loans at the Edinburgh Fringe, comedians, and particularly stand-ups, have fascinated me. And it’s weird, but I have always felt slightly apart from them, as a tribe. I am a comedian myself, but not a pure stand up, although many of my friends are. And having had romantic entanglements with a few along the way, I got to observe many in action (and out of action) behind the scenes. And of course, I have gigged a great deal myself all over the country, so I know first hand how it feels to be on stage, looking out at several hundred (or even thousand) expectant, up-turned mouths, waiting for the first laugh to hit. A first laugh that will not happen unless you create it. Thrilling.

But as time has gone on, I find I want to write about it more than I want to live it full-time. And so I have all but stopped doing any live shows myself for now, because there is so much to say about everything that goes with this world - not just the thrill of the performance, but also what goes on when the microphone is switched off. The psychology of it, the reality of it, the brutality and fragility of it. And that’s before we’ve even get to the funny stuff.

Over the years I have seen or heard about so many jaw-dropping moments, relationships, punch ups, gigs-gone-bad, gigs-gone-wild etc etc that sometimes I think I might burst with the desire to write it all down. So I decided to create a kind of alter-ego: Brenda Monk. She’s not me – she has some similarities, but she is essentially a different creature altogether. She is a true stand-up, by her very nature – it is under her skin, itching and bubbling up.

She’s an addict, but it’s the recognition of the crowd she needs, the validation, the space, and yet also the intimacy. And of course, the jokes – she sees the potential for material in everything and gets sweaty-palmed if she hasn’t been on stage in more than 48 hours, trying something out – it doesn’t matter where, it doesn’t matter when, no distance is too great, no slot is too late.

But she wasn’t always that way, or rather, she was, it’s just she didn’t know what she was supposed to do with all the restless, smart-arsed energy that fizzed around her before she discovered stand-up, and so in Brenda Monk is Funny she breaks up with her boyfriend (also a stand-up comedian, and a successful one at that) and decides to start keeping all her best jokes for herself.

My aim is to write a series of novels about Brenda and her journey to comedy super-stardom. But this is the beginning, where you will get to witness her very first walk to the mark on the stage in front of the bare brick wall, with just a spotlight and a PA system for cover. It is Brenda Monk discovering something we all wonder from time to time: am I funny? And furthermore, am I funny enough to walk out in front of a room full of strangers and say, ‘Hi, I’m here to make you laugh, and don’t you worry, because I will’. God, just the thought of it gives me butterflies.