Research. It is a word that conjures very different ideas depending on who you are and what you do. When I think of it my mind is cast back to my time at university and spending hours upon hours in the British Library trawling through musky tomes and daring not to cough, lest a librarian slap me in the face. However, research for Breaking the Foals was an entirely different affair, and I thought I would share with you some of my experiences in establishing the historicity of what I would one day sculpt into a novel.

Once I’d torn through Homer, Ovid, Virgil, Quintus Smyrnaeus, Aeschylus, Euripides and Sophocles, my head was full of gods, heroes, battles, tragedies, journeys, monsters and poetry. A feast of blood and bronze. I recall many nights sitting in a pub up in London when I was around 20-years-old, waiting for my wife to finish the evening lecture at university she attended once a week. I would be in a corner with a pint of Kronenbourg, reading through my Robert Fagles translation of The Iliad and scribbling out notes – I really didn’t know what for at the time, though I definitely had an itch to write something at least inspired by Homer.

At some stage I asked myself: what if there is something to all this? What if, at the heart of the myth, there is a kernel of truth? It didn’t take too much digging to establish that the answer was a resounding yes – the myth may very well have been inspired by historical events. 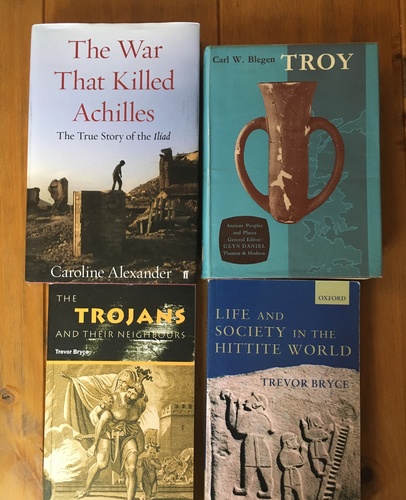 Above: A smattering of my research texts.

The active search for an historical Troy is at least 155 years old. We owe both thanks and raised eyebrows to a man named Heinrich Schliemann who, commencing work in 1871, began to dig at the site of Hisarlik, in modern Turkey, where he believed Troy was located. A few years earlier, he had published Ithaca, the Peloponnese, and Troy, in which he argued that Troy was located at Hisarlik, something he had been convinced of by the Englishman Frank Calvert (whose name was kind of lost to posterity). Schliemann was very rich and took his enormous resources to both Greece and Asia Minor, where he was to dig at a veritable feast of archaeological sites. Unfortunately, in his enthusiasm to locate Homer’s Troy, he ripped through many layers of the Hisarlik ruins, doing irreparable damage to the site in the process. However, he did find the evidence he was looking for: fortifications, houses, frescoes, gates and gold (what he would call ‘Priam’s Treasure’). With this discovery, Schliemann fulfilled a lifelong ambition in discovering Troy and he secured a place firmly in the history books.

Fast-forward to the 21st century and what developments have there been? Well, digs at Hisarlik continued after Schliemann’s death – so long as there was enough funding – first with his assistant, Wilhelm Dörpfeld, and then later with Carl W. Blegen. More recently, a chap named Manfred Korfmann of the University of Tübingen led a joint dig with the University of Cincinnati, but he passed away in 2005. Currently, Professor Rüstem Aslan is directing a new dig which commenced in 2014. Our knowledge of Troy has increased in part due to excavations at the site at Hisarlik, but also because of clay-baked tablets (the ancient equivalent of Wikipedia) that have been dug up at various sites across Turkey. We now have wonderful – and I do mean wonderful – texts produced by the resident empire of the time, the Hittites, who were exemplary record keepers, and there are plenty of mentions of a kingdom called Wilusa, located at Hisarlik – the site of Troy. Indeed, in one text, the Alaksandu Treaty, we have discussion of a quarrel between the Hittite king and a powerful king of the Ahhiyawans (scholars now believe the Ahhiyawans to be Mycenaean Greeks) about Wilusa. Now, here’s the really cool bit. You know Paris, from Homer – the dude who abducted Helen of Sparta, the event which started the Trojan War? Well, Paris was just a nickname; his real name was Alexandros. Alexandros = Alaksandu? Just sayin’. If we couple that with evidence we have from recent archaeological digs (the city was much bigger than first thought, and there are signs of ancient battle) then there is definitely reason to be excited. 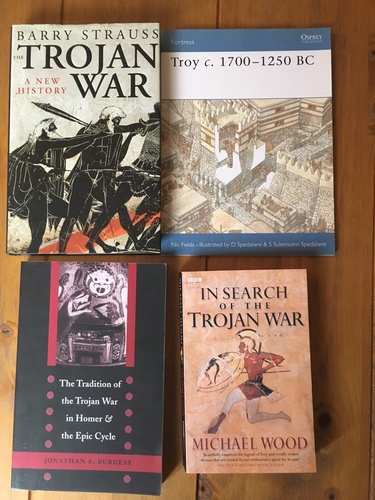 Above: A further smattering of my research texts.

Now, I’m not going to go any further into this history lesson of Hisarlik and the Trojan ruins, so let me take this update back to my own personal search.

I read as much as I could on the subject of Troy. Of particular importance was a man named Trevor Bryce, an Australian Hittitologist, whose research laid the foundations for my novel. Now, as I touched upon in a past update on this site, the Trojans – let’s now call them Wilusans – would have been most influenced by Hittite culture, even though ancient Wilusa would have been as metropolitan as contemporary London or New York. I decided that if I wanted to get inside the heads of these people, I had to understand the Hittites. I pored over their religion, laws, customs, eating habits, agricultural practice, administrative ideas, court and royal family behaviour, trade negotiations, warfare – you name it. For me it was the little nuances of their culture that fascinated me and I was particularly interested in some of their quirkier ideas. For instance, it was lawful to make love to an animal – say, a horse – but not a cadaver. And the donkey was a symbol of kingship. Also, the fossils of prehistoric creatures were sometimes unearthed and believed to be anything from giants to centaurs. I also paid strict attention to correct terminology – so, where we say King Priam or Prince Hektor, it would have actually been labarna for Priam (king and chief priest) and tuhkanti (crown prince) for Hektor. World building is great fun and I took my time to populate Wilusa and its surrounding countryside with appropriate animals, plants, weather conditions, festivals, etc. I can tell you what the average catch for a fisherman would have been on a regular day, and what the farmers may have brought to market at the break of dawn. I also added a lot of linguistic touches for a further splash of realism so, for example, Priam is referred to in the novel as ‘my Sun’, as a formal way of linking him to the sun god; this is how labarnas were referred to by the Hittites. 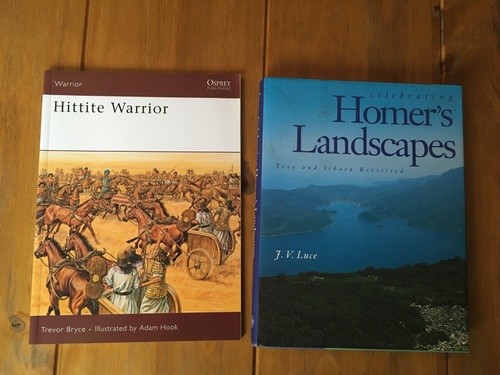 Above: A final smattering of my research texts - there were many, many more though!

From the start, I wanted to historicise the Trojan War and so I did equal levels of research on Mycenaean Greece. But as the novel developed, the Greeks exited in favour of another foe for Wilusa and so Breaking the Foals took a change of direction – away from a war between opposing forces either side of the Aegean. The myth of the Trojan War is extremely unlikely to have been based on any single event, and was more likely based on multiple events across a period of time. I have therefore taken the physical evidence unearthed and developed a reasonable scenario for a conflict in Wilusa based on that evidence. For me, 10 years on from when I first started this project, Breaking the Foals has become a far more intricate novel, staying faithful to the known facts, while being plausible with the characters and events that had to be built in.

But research should never stand in the way of a good story – Breaking the Foals was written to entertain, but if it can inform at the same time, then I’m a happy guy.

Next time on Updates: I will begin my next series of posts Out of the Stable, Onto the Shelf which will detail all the work that now goes into readying the novel for publication. This series of posts will give you a unique insight into the publishing industry and will keep you informed of how far the book is coming along. However, this series of posts will only be available to those who have pledged to my novel!