A Guide to the Cult Sitcom

The first episode of Bottom - Smells– was unleashed onto an unsuspecting British public at 9pm on Tuesday 17th September 1991 on BBC2. Arriving with its gloriously filthy mix of absurdity and mundanity, the first Bottom instalment (ooh-er) was laden with the whiff of desperation, the stench of Swarfega-soaked underpants and the reek of inadequacy. In short, Smells was the perfect introduction to ‘sad old gits’ Richie and Eddie. A new double act that built upon the palpable chemistry Rik and Ade had honed as co-performers. Fans were almost guaranteed to take these characters eagerly to their bosom (unlike any sane woman Richie and Eddie attempted to woo with their out-dated sexist, homophobic and perverted view of the world).

Richie and Eddie are vile characters and yet a compelling likeability never waivers for the audience watching their often grotesque, always hilarious, escapades. A warmth and familiarity is brought to the pair by Rik and Ade’s performances. They had, by their own admission in several interviews, been honing playing the same characters in various guises for years in The Dangerous Brothers, The Young Ones and Filthy, Rich & Catflap, with the characters representing periods of their lives.

“The Young Ones was your teens. Then let’s say Filthy [Rich & Catflap] was about your twenties. Bottom was about your thirties where youth has gone, it’s just shit and life is fucking nothing.”

The discerning British comedy viewer’s awareness of Rik and Ade’s act helps sell the disgusting duo’s desperate behaviour as movingly pitiful, almost playful, rather than abhorrent. Rik and Ade went further than the recognisable ‘love to hate’ relationship we have come to appreciate in British comedy. In their new sitcom, Bottom, the situation was to be most foul and the comedy beyond absurd. Crucially, throughout the show, the bleakness of Richie and Eddie’s circumstances is counter-acted to hilarious results by the characters’ eternal optimism and, when that fails - ironically enough – they use violence to resolve most conflicts.

Before the show utters its opening line we’re gifted a playful pun steeped in toilet humour; the first of what would be a running joke that each episode title works as a double entendre when following the word ‘bottom’ (Bottom Smells. Bottom Gas, etc. Get it? “Great gag!”).

Our first impressions of the characters if we base them solely on appearances, i.e. their costumes, don’t immediately marry up to the wretched pair of unemployable losers lying at the bottom of the heap that we’ll come to understand. Whereas The Young Ones firmly placed the geeky would-be anarchist Rick and brash punk Vyvyan in the 1980s, Richie and Eddie’s outfits have a timeless quality to them given that 90s fashion (or lack thereof) would have aged the show more hideously than its many dated references to celebrities and politicians.

Rik and Ade almost certainly deliberately chose to have Richie dressed smartly in a clean trench coat while Eddie’s brown trilby hat tops off a thick woollen overcoat. It gives their characters an inherently British, somewhat respectable appearance to the outsider. (However, it’s also possible that Richie’s trench coat’s purpose is to subconsciously remind us of its link to a stereotypical perverted ‘flasher’ outfit.) Brown and grey are the characters’ prominent colours, there’s no brightness to be found in their drab silhouettes. Distinctly masculine, both wearing shirts and ties - Richie’s complete with a shiny tie clip while Eddie’s tellingly splays out in slobby disarray – each nods to the aspiration of being counted amongst the middle classes for whom capitalism has been a success.

Even though Richie’s the one more focused on how people see him, keener to appear ‘better’ than others, surprisingly, he wears jeans. They are the giveaway that he’s very much working class, lower down the ranks than he sees himself. Richie possesses delusions of grandeur and his clothing choices both reflect and betray his class fantasy from the very moment he steps on screen.

There’s a lot to analyse (for eagle-eyed over-analysers such as ourselves) within seconds of the opening episode. As the series continues their world opens up to varying levels of filth and despair. Within the first few moments on screen, beyond the actors’ attire, we notice their surroundings… it’s a shit hole. A dimly lit squalid flat with filth on the walls, the set looks very lived in and instinctively you can tell it’s just the two of them living there.

It’s never overtly explained but as the series goes on there’s a heavy inference that Richie came from a family that once belonged to the middle class; as we hear in the original pilot episode Contest (S1 Ep3), his aunt Mabel is revealed to own the London flat he and Eddie share while, in Apocalypse (S1 Ep4), another aunt, Olga, dies and leaves him an inheritance he’s long been waiting for. In Contest we learn that Eddie pays rent – or at least, he owes rent to Richie. Presumably this money is how Richie’s supposed to sustain himself, as he has never worked a day in his life. He’s the housewife, he is the one who attempts to make the ‘Friday night fry-up’; his role is at home cooking the meals. Although, judging the state of the flat, he rarely cleans anything (beyond giving his own penis a good polish several times daily).

They may within the course of the episode be revealed to live on the lower rungs of society but they do at least own a suit – we see Richie in much smarter trousers and braces later on in the episode – and these are the outfits they choose to go out ‘on the pull’ in to impress women with. It will be explained, as the show develops, that each character is wearing the only outfit he owns. In the wrong actors’ hands this fact could be desperately upsetting but, thanks to Rik and Ade’s talent for writing and performing, we accept Richie and Eddie as a disgusting pair that we are to have limited sympathy for. Much like Albert and Harold in the classic BBC sitcom Steptoe and Son- they are a filthy duo just about managing to scrape through existence - trapped with each other through necessity and, deep down, love. They never wash, their living conditions are grotty, and they almost certainly struggle with body odour (which Richie of course mocks when Eddie returns home in Contest (S1 Ep3). Indeed the parallels with Steptoe and Son were numerous. As Ade generously said when asked if Galton and Simpson had been an influence on their work:

“I remember when we sat down to watch the first episode of Bottom go out we thought ‘Oh Christ, they’re going to sue us.’ We basically nicked their act.”

This episode is called Smells for more than the double entendre. They both stink physically and figuratively speaking. They are the sort of drunken, lecherous creatures you would give a wide berth if you encountered them in real life. Yet, in the land of sitcom, we are drawn in to their depressing world-view. We enjoy laughing at their attempts to triumph when we know only misfortune will be ultimately served to them. We relish in their trials and tribulations because they aren’t happening to us. There’s always hope but it’s always dashed and British comedy thrives when its characters are at their most despairing.

Smells opens to a backdrop of a rain-soaked window opposite the front door as Richie and Eddie return to their squalid flat. Immediately it’s established that they’ve had an unsuccessful night attempting to seduce women and Richie is lamenting their failure.

Pre-the dawn of the ‘unsolicited dick pic’, we discover Richie and Eddie’s main ploy has been to draw the ladies’ attention to their penises; Richie attempted to make his wad look bigger by stuffing toilet paper down the front of his trousers. Meanwhile Eddie performed his party trick of shoving a bottle of Vimto down the front of his pants, earning him a kick in the knackers and a drink in his face. This, to Eddie, is considered a result (“Always keep your mouth open when insulting a lady.”)

As with all great sitcom characters the audience is quickly given an insight into their desires and their comedy conceit. Richie wants a woman to have sex with him but he’s hopelessly unable to charm any ladies because of his desperation.

Richie’s quickly established as a virgin, bemoaning the fact as he declares that he wants to have sex just once to ‘see what it’s like’ before openly perving on a couple kissing in the opposite flat through the kitchen window. However, Richie can’t even achieve this act of voyeurism as they spot him and close the curtains.

We later witness that his inability to admit that he’s nervous when talking to women leads to a crass approach combined with his woeful lack of social awareness. Eddie meanwhile is similarly coarse but usually too inebriated to see through his plans to cop off with a woman and turns to the bottle instead. (To drink alcohol, I mean, not just give the birds his impression of the Eiffel Tower.)

Having acquired several first draft scripts including Smells, we can reveal that the original script for Smells opens with Richie and Eddie in the back of a taxi. While Richie racially abuses the clearly white, English driver, they discuss their desire to ‘get a shag’ and shout out the window to women in a passing car. The scene culminates in a stunt that would’ve seen Eddie clinging onto the roof of the cab before being thrown off as it veers around a corner. Perhaps it was considered too dangerous for Ade to attempt but, knowing the BBC, it was probably too expensive.

In this opening episode Eddie’s focus is on this other base urge; he copes with his boredom by drinking dangerous amounts of booze. Coupled with his ‘free drink’, Eddie’s alcoholism is seeded from the off, drawing big laughs as he has the ‘fantastic idea’ to drink his pint and later his penchant for substance abuse is made starkly clear when he ingests the entire bottle of pheromone sex spray.

Did you just hear the letterbox flapping?

Happy birthday to me! A bundle of post intended for the residents of 11 Mafeking Parade has found its way to us. We'll keep the contents a surprise but we did steam one open and saw that Rumbelows REALLY want their TV back... 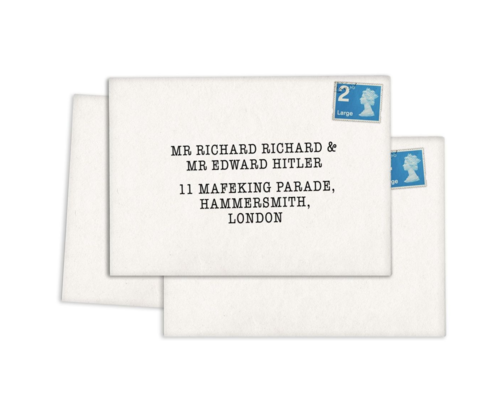 A pair of Richie's pants, complete with their unique "lived in" look. Handle with care (and rubber gloves and tongs). 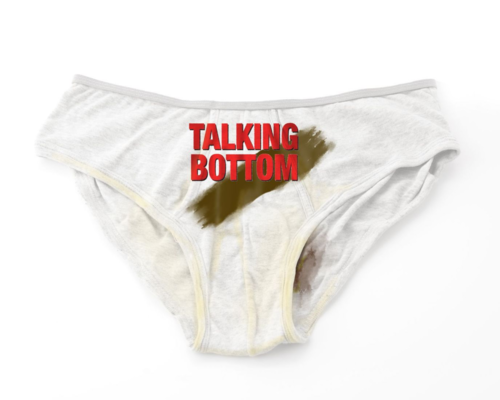